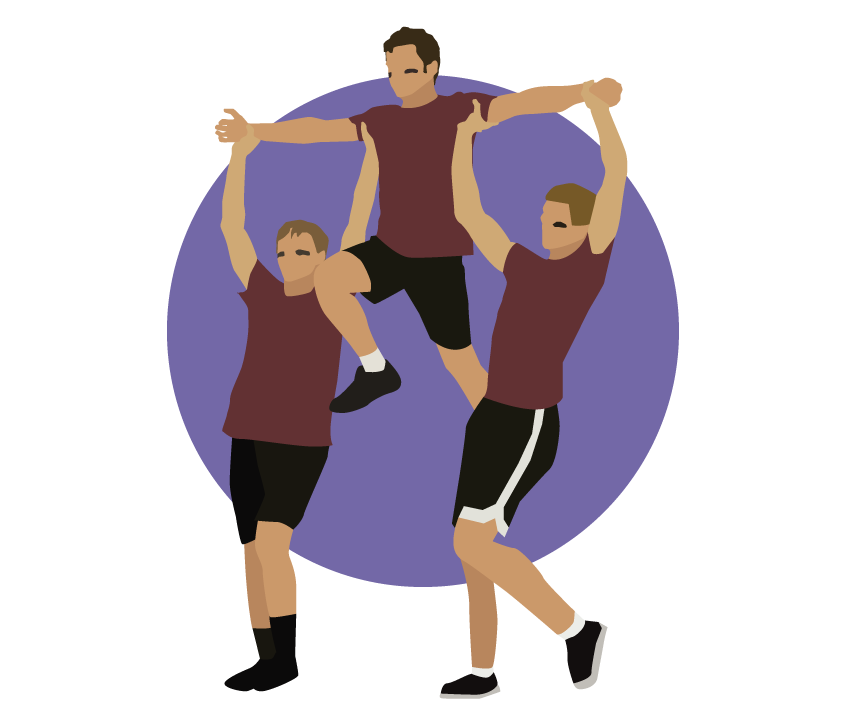 Emma Harville (Lifestyle Reporter): An abundance of floor slaps, unoriginal kick lines and a bandana for every color in the rainbow.

Jared Martinson (Sports Editor): A collective sigh of disappointment when we reached the end of the night with no “Barely Breathin’” clips.

Sierra Beilby (Columnist): Tangible male testerone in the whole Bethel gym, an impromptu National Anthem, and the most well-deserved yellow flag to ever be thrown.

Which hall’s dance was the best?

Josh: Bodien collectively Naruto Ran onto the floor, but that alone didn’t swing the night their way. I have to give it to Nelson, maybe I’m a homer (that was my freshman dorm), or maybe it was that they spent somewhere between two minutes and eternity standing on the floor waiting for the tech crew to figure out the music, but they were all in sync on a deeply spiritual level. I never thought having two guys roll across the gym floor would win me over, but here we are.

Emma: Getsch really bounced back amidst the tech crisis, and the middle splits were even better the second go round (and hopefully less painful?). But I have to say that the commuters stole the show. It was everything I never needed to see and more.

Jared: Commuters win. No weird flexes here — Steve Skwarek and JJ Wahlquist scored major points with me and the freshman ladies by being the only dudes on the court to actually have biceps to show off. It can’t be easy to pull together a bunch of people who don’t live in the same building but the chemistry was as smooth as the combo of Portland Trail Blazer backcourt Damian Lillard and C.J. McCollum.

Sierra: I’d have to cast my vote for Nelson part 2, Electric Boogaloo. Waiting for Colin Biel to plug in his iPhone was well worth it by the first coordinated head turn. They managed to be both coordinated and hyped– props to my freshman alma mater.

Which hall had the best compilation of music?

Emma: I have to admit that I was pretty caught off guard when Meghan Trainor (is she still a thing?) was followed up by some good ol’ Lauren Daigle. Terrible, but also so, so good.

Jared: North inserted “Me” by Taylor Swift into their soundtrack. And since the “Lover” album is her best since “Fearless” in 2008 (fight me on that, I DARE you), that’s my clear-cut winner.

Sierra: Pretty sure Bodien had a moment where all the dancers were just snapping along to a Lauren Daigle song. I was giggling too hard to even tell which song, but those boys know exactly the audience they were pandering to.

Which hall had the single best dance move?

Josh: All of off campus hit the woah at the same time. It was a simple move, but I swear the audience held its collective breath waiting for the invisible bounce to crash back to earth.

Emma: I was in awe when the very little guy from Arden did a flip over his dance partners. A slightly wobbly landing, but an awesome flip nonetheless. I also have to hand it to Nelson for their unique spin on the worm – They exerted a confidence that almost made me disregard the unfortunate orange t-shirts (I got rid of mine after freshman year).

Jared: First, can we all agree to banish kick lines from Men’s Dance going forward? That ish needs to go, now. I can’t believe we all still go crazy for guys tearing their hamstrings. Rant over. One guy from Nelson did a little elbow push thing to the lines on either side of him and they responded with dramatic quick head jabs. I liked that.

Sierra: That gym floor was well slapped tonight, and I’m sure the sounds will be reverberating through time until the classic move is revived for Men’s Dance 2020. Although, did anyone see Charlie Hoaglund do a full split?! Somebody might need to get that boy some ice to sit on tomorrow.

Which hall had the best outfit?

Josh: While Steve Skwarek single handedly changed my mind about mullets tonight, I have to give credit to Heritage. I wasn’t entirely sold on the flannel shirts until they were used so provocatively.

Emma: I have to give points to Heritage for somehow getting away with skin tight spandex. The face paint was also a nice touch. But you can’t beat the commuters’ plain white T’s.

Jared: I recently purchased my first ever denim jacket, double-clearanced for $10 at Target. I wear that thing like it’s my skin. Getsch sported them brilliantly and instantly made me feel like a part of the Sketch Squad.

Sierra: While Heritage and Getsch looked like cohesive units in their get ups, I award best outfit to Jake Stein. Finally those wind pants with the buttons down the sides are being put to good use. I wonder if anything can compare to the feeling of ripping your pants off in front of a crowd of cheering students? (No worries, Jay, there were shorts underneath).

What was the best part of the technical mayhem?

Josh: Getsch restarted its dance, but during the second attempt the music sounded exactly the same as the first. It really seemed like they just forgot the dance and bamboozled their way to a redo.

Emma: All of the Nelson guys standing in position for a solid 39 seconds before realizing that it probably wasn’t going to happen. I hope their necks are okay.

Jared: The tech team not getting upset or frustrated and solving the issues as fast as they could!

Sierra: Colin Biel running upstairs to save the show with his Spotify. A national hero, indeed.

This is an opinion piece and does not necessarily reflect the views of The Clarion, its staff or the institution. If you would like to submit a response or an opinion piece of your own, please contact Editor in Chief Josh Towner at josh-towner@bethel.edu.