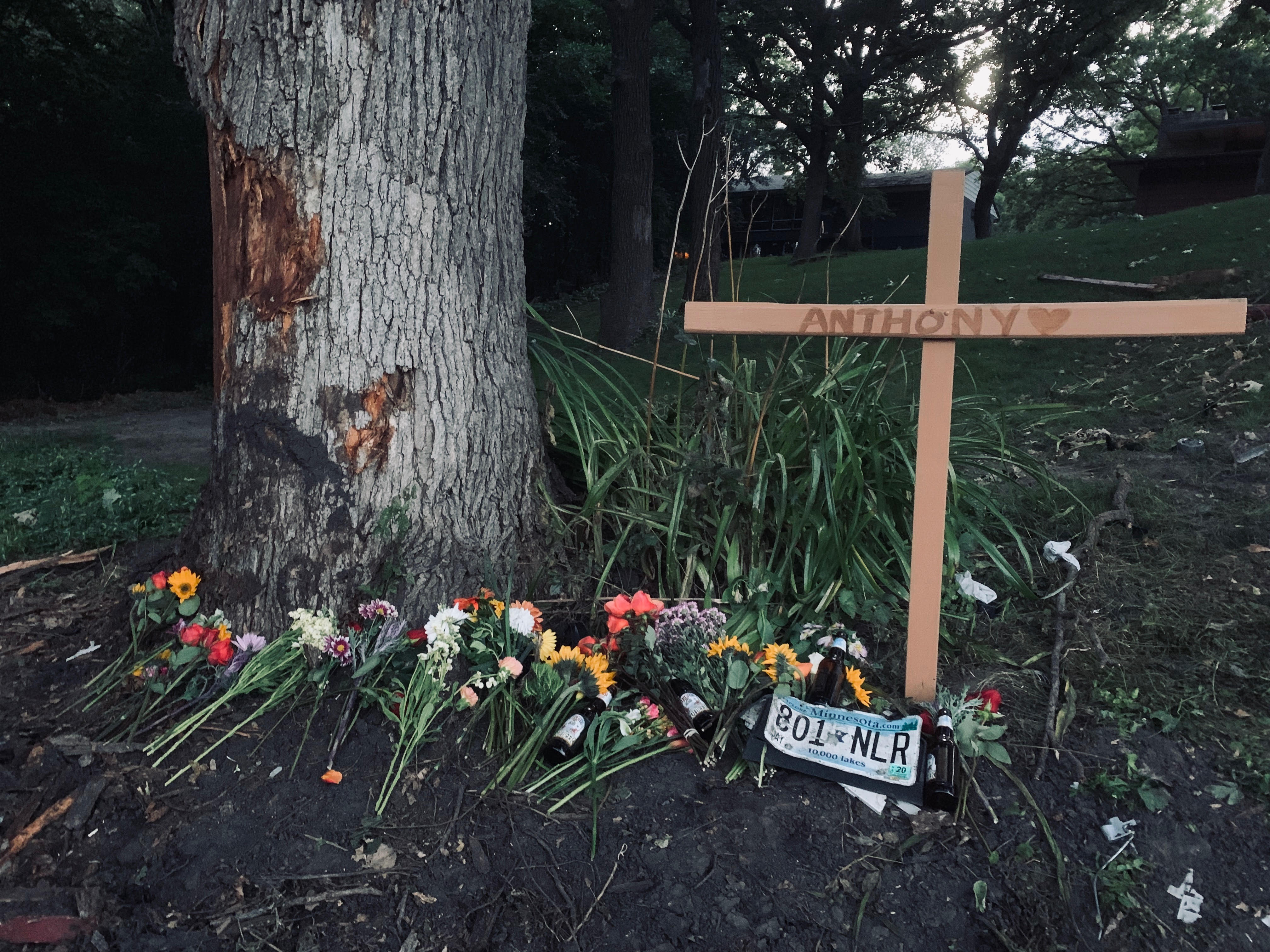 Anthony Nelson didn’t have a scratch on him. Even his hair was perfect.

He sat under a mangled chassis wedged against a scarred oak tree during his final hours, but he seemed to be simply resting.

Five days later, his dad, Brian Nelson, recited Psalm 91:4 to more than 1,000 guests sitting in packed pews and standing in the reception hall at Cornerstone Church in Austin, Minn.

“He will cover you with his feathers,” the father read. “Under his wings you will find refuge.”

Anthony Nelson, 22, died in a single-car crash July 29 at about 10:45 p.m. when his white 2014 Ford Taurus veered into the ditch and struck a tree and a utility pole beside Old Snelling Avenue on the shore of Bethel University’s Lake Valentine. The cause of the crash is still under investigation by the Ramsey County Sheriff’s Office.

But just across that same lake, in business classrooms and residence halls and on the hill where he lit off fireworks, his name is still spoken.

His mom, Lois, said the first thing people noticed was his smile. Wide and bright, it welcomed oncoming hallway traffic and teammates in sweat-soaked basketball jerseys. And it never let someone pass.

Bethel Assistant Basketball Coach Alicia Hvistendahl remembers talking to Nelson every time he passed her in the Wellness Life Center. He would plant his feet and ask about basketball or her kids, Macey and Jordan, before walking to the next weight machine.

She remembers his laugh, high and giggly. The same one that would echo through his house in Blooming Prairie and make his parents crack up in the living room.

And Hvistendahl remembers calling every player on Nelson’s basketball team from her office under the Robertson Center gym to tell them that their friend was gone. She remembers the phone-call sobs. And the pepperoni pizza served with Gatorade and water on the BC Patio, enough to feed whichever teammates showed up to share memories, like the time Nelson scored 11 points and grabbed two rebounds in his six minutes of play during the 113 to 64 win against Macalester University, one of his two Bethel varsity appearances.

And she remembers driving home from the funeral and laughing when she got a text from her husband saying the kids fed the dog a popsicle and it threw up on the couch. Because they were safe. Just kids having fun like Anthony always did.

“One thing I’ll take away from Anthony was his joy in every moment,” Hvistendal said.

As a child in Blooming Prairie, Nelson would put on white underwear, a wide-brimmed hat and leather boots and pretend he was a cowboy. After school and in the summers, he played basketball in the driveway for hours and dribbled loudly enough for the neighbors to hear.

He tagged along with his two older sisters, Alicia and Lynnae, to Blooming Prairie Awesome Blossom basketball and football games. And he never wanted to bring a friend on family vacations, even when his parents said he could.

In grade school, his teachers paired him with classmates with learning disabilities. And in high school, he mentored his football coach’s kids.

“He wasn’t perfect,” Brian Nelson said. “But he was darn close.”

Blooming Prairie High School football coach and business teacher Chad Gimbel offered a plate of his wife’s salsa with tortilla chips whenever Nelson came over. The two would chat about football before Nelson ran out the front door with Gimbel’s four kids to ride bikes and play Pokémon GO.

When the Gimbels received news that Nelson was gone, Gina, a junior at Mankato State University, wrote a letter to Brian and Lois. She explained how Nelson had been a constant mentor throughout high school, supporting her through friendship issues and brightening her day over chips and salsa.

Just one month away from his freshman year at the University of St. Thomas when Nelson died, Seth had to find someone else to guide him around the Twin Cities.

Nelson is gone from Blooming Prairie, but the memories of him persist. Memories like the time he threw a game-winning block against Lester Prairie and celebrated more than the guy who scored the touchdown. Or the time he scored 43 points in the second game of his senior basketball season.

“I always said, ‘On my deathbed, Anthony, tell me that story about your 43 points,” Brian Nelson said. “Now, I have to tell it.”

Nelson played in two Bethel varsity basketball games for a total of nine minutes. He scored 11 points against Macalaster and 0 against Concordia College. His name is not listed on the Bethel Athletics online football statistics sheet. But he showed up.

He showed up for Hvistendahl when she needed him to dress for varsity but play JV. For the middle-schoolers at Bethel’s youth basketball camp who wanted to be like him when they grew up. And for his toddler nephew, Owen, who always wanted to put on a Royals helmet that was too big and take a photo with uncle Anthony on the turf after a football game.

“He loved people,” Nelson’s sister Alicia Levno said. “He showed up for people.”

An accounting and finance major, he filled out tax forms with a smile and dressed business-formal whenever he could. He bought his favorite suit at Goodwill for $2. Gray jacket with a black lapel and a black tie with white polka dots.

It was the same suit he wore to every event that required more than jeans and a sweatshirt. The outfit is showcased in every photo taken with his friend group at homecoming, Christmas Gala, and Spring Banquet during his three years at Bethel.

The people who crowded together in those photos met Nelson in Edgren Hall freshman year. And even though he formed a friend group from Getsch Hall first, the Edgren crew still latched onto him.

He would text “let’s do something fun” in the friends’ Snapchat group titled “Homeslices” until someone responded or he got bored enough to set off by himself.

Most of the time, he played Pokémon GO on his black and red mountain bike and pedaled to public parks so far outside campus that he had to call his friends for a ride home.

Or he would ask someone to go to the Minneapolis Institute of Art to look at paintings and sculptures in silence.

Or he would break the rules. Like the time he set off fireworks his freshman year on seminary hill and told his friends that they had 30 seconds to run. And the two times he did it again in the years following.

He wore orange Hollister sweatpants and fed his Betta fish named Spike and used his roommates’ email addresses to get free trials on HelloFresh, a cooking service that delivered fresh ingredients for his culinary experiments. Ingredients like the chicken he saved from the pizza-box fire he started in his North Village kitchen.

And he kept a journal where he ranked brands of root beer. A&W and 1919 were his favorites.

“Around his friends, he was unapologetically himself,” Nelson’s friend, senior Paige Ardizzone said.

He remembers the night Nelson texted him to “get in the car now,” because there was a Dratini nearby that Nelson had tracked on a special app. And 45 minutes later, the two found themselves across the St. Croix River in Wisconsin. They stopped for burgers before heading back. And Nelson caught the Dratini.

Schipper had plans to play with Nelson after the horse races at Running Aces this past summer. He drove up from Iowa after working at Danfoss Power Solutions only to be greeted by a call from another member of the friend group, senior Mike Monson. His buddy couldn’t play anymore.

After he died, Nelson’s friends gathered at the crash site. They laid glass Trader Joe’s root-beer bottles and bouquets of red and orange flowers in the ditch and prayed around a wooden cross with “Anthony” written in thick brown letters on the horizontal beam.

“For me, he was a prime example of how to live your life,” Ardizzone said. “He made me more patient, more caring and more understanding just in the way he expressed his love.”

Bethel University said one last goodbye Sept. 15. Outside Benson Great Hall, the sun shined on the red brick and cut through the few wispy clouds that still hung in the powder blue sky. Inside, the lights were dim.

“Nothing I Hold On To” by Will Reagan played over the speakers as the cushioned rows filled with students and professors and coaches and family. Student worship leader Lauren Wolkerstorfer sang “Amazing Grace” and the crowd joined, hushed at first but growing ever louder. Hands raised and palms opened.

The last line marked the beginning of the service. “You are forever mine,” the crowd sang.

Brian Nelson approached the wooden podium with a Spalding basketball binder in hand.

“Someone told me at the visitation, ‘whenever you see a butterfly, think of Anthony,” Brian Nelson said into the mic. “Today, you’re all little butterflies.”

He read a paper that Nelson wrote his senior year of high school titled “Camp Calamity.” It was about a sixth-grade basketball camp and the moment he found out his uncle Rodney had died in a motorcycle crash on Red Ball Road north of Blooming Prairie.

The paper mentioned Rodney’s funeral. Packed pews. People standing in the back of the sanctuary. A tragic loss of life. 500 people who heard about Jesus.

At Nelson’s own service August 3 in Blooming Prairie, eight Bibles were picked up. A woman rededicated her life to Christ. And a pregnant family friend told Brian Nelson that she hoped her baby would turn out like Anthony.

“It’s like the kid wrote about his own funeral,” Brian Nelson said.

Sobs and sniffles echoed off the walls of Benson Great Hall as eyes turned wet and red. Hands clasped together in prayer.

Three of Nelson’s closest friends walked across the hardwood and took turns sharing memories. Haley Meyer talked about meeting Nelson at a social event for the volleyball team and going on a couple dates with him.

Sydnie Sybrant told the story of Nelson’s GAD-NIK proposal and going on the spinny ride at the fair together.

Kyle Peach, Nelson’s best friend and roommate, unfolded a piece of lined loose-leaf paper and began to read. He shared memories of Nelson switching seats at Twins’ games and jumping on his bed in the morning and playing Monopoly until 3 a.m.

“Don’t explore too much of heaven without us,” Sybrant said, quoting friend Paige Ardizzone.

The speakers settled into their seats as the worship band took the stage for one last song. The crowd stood as guitarist and Nelson’s freshman floormate Alex Gonzalez played the opening chords to “I Can Only Imagine” by MercyMe.

Nelson’s fans swayed on the balls of their feet and sang with their eyes closed. But Brian and Lois Nelson kept theirs open.

They watched as a sea of swaying dresses and collared shirts worshipped in honor of their son. Brian put his arm around Lois’ waist and smiled.

And across the mirror-calm Lake Valentine, through a thin strip of trees and utility poles, stood an oak tree with bark missing and a pile of twisted metal covered with branches and burrs. The cross had been taken out of the soil. And the bottles recycled. But the crowd kept singing.

“It brought us comfort knowing that he passed so close to a place he loved,” Lois Nelson said.

0 comments on “All little butterflies”