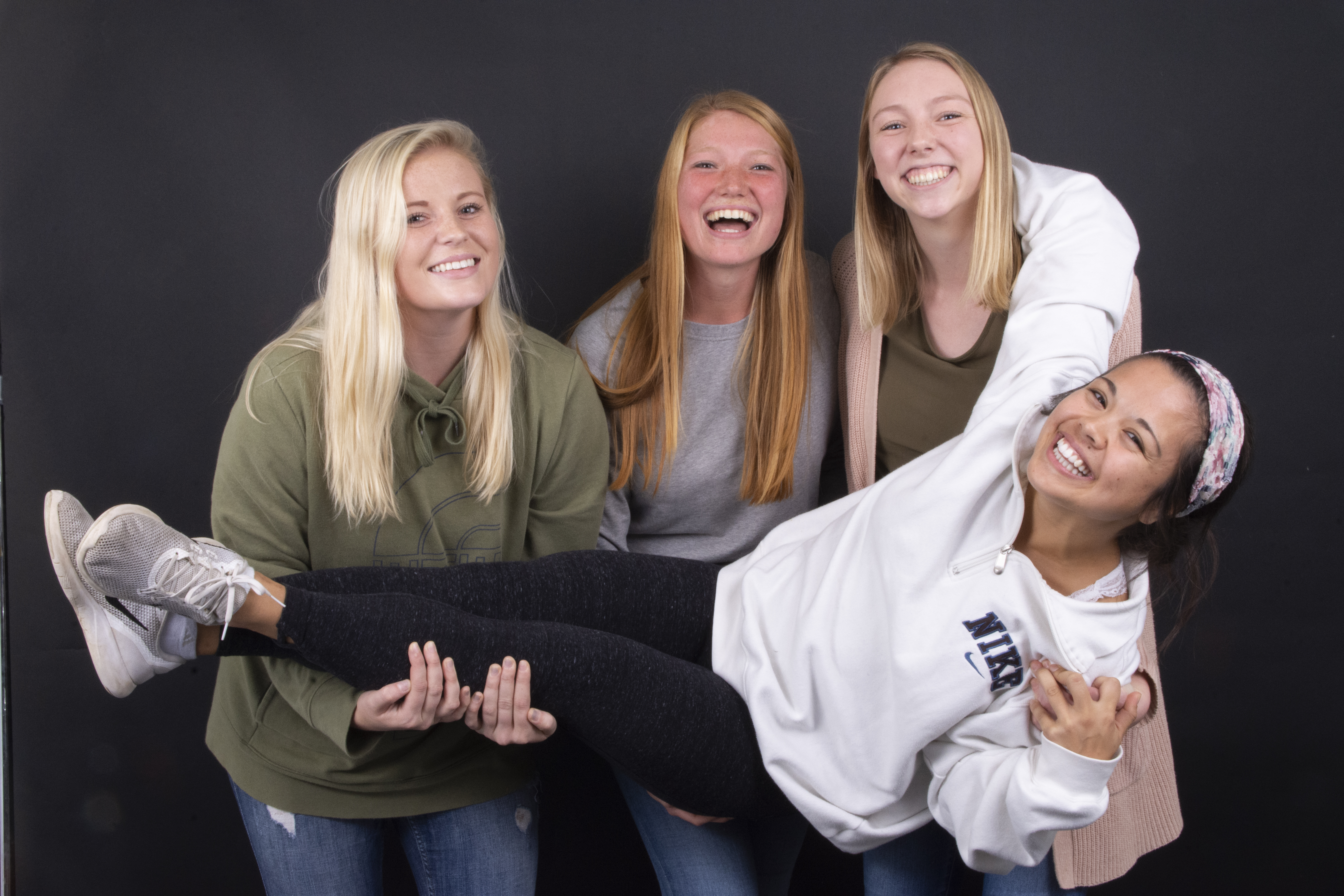 The college journey of the four Bethel senior volleyball players wasn’t easy. But they have braved it together.

The four Bethel volleyball seniors shared a bedroom on the team trip to Costa Rica last May. Every night before bed, no one wanted to be the last one to say goodnight.

Of the 12 bright-eyed freshman volleyball recruits in the fall of 2016, only these four remain on the roster. And they want to leave a legacy when they go.

Emily Klassen, Dominique Dabu, Haley Meyer and Sydnie Sybrant lead by example. There are no cliques. There is no differentiating the junior varsity team from the varsity team.There is a true bond across the board, and it begins with the quartet of veterans who have seen just about everything. “It is sad because we’re not going to be here to see it through in the future seasons,” Sybrant said. “But also, leaving this mark, saying that we are this one huge group and we work so hard together, there’s no separation among the team, that is what we want to leave Bethel volleyball with.”

Emily Klassen is an accounting and finance major from Melrose, Minn. She is described by the other seniors as calming, always smiling and genuine. “There is never a day when I wonder what Emily is going to be like because she is always herself and she is always joy-filled and fun to be around,” Meyer said.

When studying abroad, Klassen crashed a fancy wedding. That’s something her mom doesn’t even know.

Dominique Dabu is a nursing major from Apple Valley, Minn. Her senior teammates described her as relatable, encouraging, and real. Dabu has tears in her eyes as her teammate Klassen said, “She’s able to encourage people and come alongside them without bringing them down,” Klassen said, with Dabu wiping away tears in the chair behind her. “ She makes people feel appreciated.”

Dabu once peed in a grande Starbucks cup on the way to a match. She called it a ‘lemon frappuccino’.

Haley Meyer is a social work major from Algonquin, Ill. Her teammate Sybrant said, “Even outside of volleyball,  there is not one thing that she does when she is not working 100 percent,” Sybrant said. Meyer once was scared she was going to get arrested in Paris for not having a train ticket and taking a different way of transportation.

Sydnie Sybrant is a psychology major from Rush City, Minn., the wise one, as described by her fellow seniors. “I think Sydnie can read people,” Dabu said of her teammate. “She’s very aware and so smart and knowledgeable. I feel like I could go to her for life advice or volleyball advice and she always knows the right words to say.”

Aware, she is. “The reason I’m still here is not because I go on the court and score a lot of points or because my stat sheet is full. It’s because of the people I get to spend every day with,” Sybrant explained.

Klassen, Meyer, and Sybrant are practice players; time on the court in-game is hard to come by. But they lead the team together from the sideline and use their individual experiences to relate to teammates who are going through the same ups and downs.

“But also, leaving this mark, saying that we are this one huge group and we work so hard together, there’s no separation among the team, that is what we want to leave Bethel volleyball with.” – Sydnie Sybrant

Dabu is the team’s libero and is a four-year varsity player. No Bethel point is quiet with her high jumps into the air that look like she’s going to cannonball into the court and her cheer-and-smile combo platter.

Yet there is no hierarchy, no level of popularity or coolness among these four; the authenticity of their friendship is a microcosm of the bigger picture — the entire Bethel University volleyball team.

One of the most vivid reasons for the team’s cohesion is still fresh in their minds. On their way home from weekend matches in Whitewater, Wisc. and Naperville, Ill., the team bus hit another car. None of the Bethel passengers were injured but the incident was nothing the team was prepared for. “It was one of the most difficult things we have ever gone through, but at the same time it has taught us so much about appreciating each other and where we’re at,” Sybrant said. The sentiment lingers.

“[It’s crazy], coming in when we were 18, not knowing these people would be a part of our lives, and now four years later I’m crying in the film room with you guys,” Dabu added.

Before each match, the team engages in “The Word”, a devotional led by one of the players that centers around a single word. Many come to mind for this pod of Bethel seniors who just want to plant seeds of love and appreciation for one another.

So before bed each night in Costa Rica, they counted to three and shouted, “Pura Vida!”, “pure life”, knowing they could all go to sleep having finished the day together.

Together. Maybe that’s “The Word” for Klassen, Dabu, Meyer and Sybrant.

0 comments on “Four years, one word”