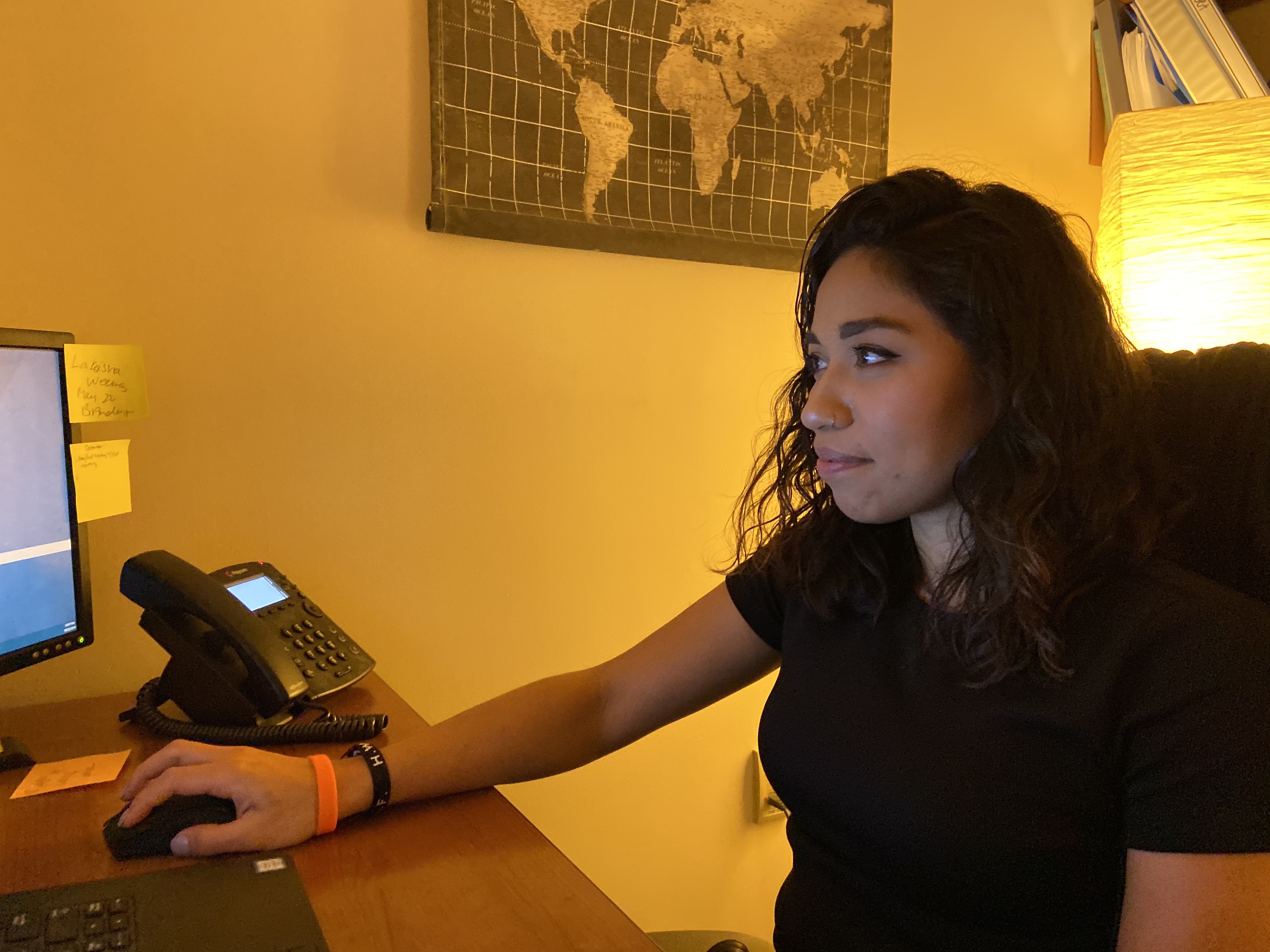 An immigrant with temporary protected status, Jackie Batres’s faith in Christ carries her through this season of uncertainty as family faces immediate deportation.

Time seems to be a ticking time bomb for Jackie Batres. Coming January 4, 2021, everything in her world could change with a court decision that will decipher her future and the futures of 300,000 other United States immigrants. For now, Batres sits behind her desk at Bethel University in the Office of Christian Formation and Church Relations, in a dim and cozy back corner.

“If we follow what God tells us, we can see the blessings after,” Batres reflected.

After graduating from Bethel, Batres desired to work with Campus Pastor Laurel Bunker, someone who has been a spiritual mentor and friend to her throughout the years.

After many applications and interviews, Batres secured a position at Bethel. In what she calls the Lord’s timing, a position opened for an assistant campus pastor and ministry coordinator in the fall of 2017, which she accepted. Next January, everything could change.

Batres and her husband, Marvin, are both immigrants from El Salvador, but have spent more of their lives tucked away contently in St. Paul, MN. As she emigrated from a country more than 3,000 miles away at age 11, Batres was determined to learn English and pursue an education. However, the American Dream was not all that Batres and her family envisioned it to be.

“Our faith in God has been the constant, driving force despite our unpredictable lives,” Batres said.

Since President Donald Trump took office in 2017, he has ended temporary protected status (TPS) for more than 300,000 immigrants from six countries, including El Salvador. Batres and her husband account for two of these immigrants. TPS is a temporary status for those anticipating full U.S. residency, and it allows those in foreign countries to remain in the United States while something catastrophic has happened in their residing country. For Batres, it was the earthquake that struck the East Coast of El Salvador in 2001.

Her status under TPS expired Sept. 9, 2019; however, a grace period has been extended until Jan. 2021. Once the lawsuit is finalized, that day will ultimately decide whether Batres and her husband stay or if they’ll have to say goodbye to the longest home they have ever known.

“How do you pack up 20 years of your life?” Batres asked as she sat back and thought about how everything might change.

Batres’s two younger siblings were born in the United States, and her older brother married a U.S. citizen, making her the only sibling still under TPS status. In 2003, more change struck their family — her younger sister Karla, now a sophomore at Bethel, traveled back to El Salvador with her mom to visit. Because of her visa status, her mom was not allowed to come back.

Batres’s mom has been living in El Salvador ever since, while her dad worked to maintain his business in St. Paul. After five years of her parents living apart from each other, her dad made the trek back to his roots to join his wife. Batres has not seen either of her parents since 2008.

Education has always been important for Batres. As she had the opportunity to attend high school and college in the United States, she believed her siblings, Jamie and Karla, should do the same. Batres proposed Jamie and Karla move in with herself and her husband Marvin to provide better opportunities, and after convincing her parents over the phone, they finally agreed to this idea. Her brother and sister wanted a U.S. education all along and were glad to move into a new home and school district. Batres and Marvin played the parent roles for the children they were never able to have.

Her brother Jamie attends the University of Minnesota while Karla studies at Bethel. And although her siblings were very independent and busy from school to work, they always went to church together, found time for family dinners and went out to the movies.

“It just makes us so proud to see where they are now and who they have become,” Batres says.

Timing and trust have been the loudest chorus in Batres’s life. She often thinks about the story of Pharaoh in Exodus and how God delivered. Batres says she believes God will also deliver in her situation.

“Bottom line, my life is in God’s hands,” she said.

Batres is seven weeks into her graduate program for marriage and family therapy at Bethel.

“I’m just trying to take advantage of everything I have,” Batres said.

This is a two-year program, but Batres is only certain she will be able to finish the next two  semesters as it will wrap up in December 2020. Until then, she perseveres and prays for the decision that will be made come next January.

The day their status expired, Jackie and Marvin Batres flew out to Washington D.C. to educate U.S. Senators and Representatives and to protest for their rights. She and Marvin are members of a nonprofit called Copal, in which they meet with other members in the Twin Cities twice a month to discuss and train on how to better share their stories and educate others on TPS.

Copal unites Latinxs in Minnesota in a communal democracy that builds racial, gender, social and economic justice across community lines. This organization seeks to network with various organizations and share their core values.

A group of six people, three with Copal and three with TPS, spent three days educating capital city citizens, such as Amy Klobuchar and other political leaders on TPS, and sharing their own immigration story. They went to Washington D.C. not only to justify these beliefs to themselves, but to inform individuals of all the other U.S. families’ lives affected by Trump’s decision.

“There are three things I can do with my situation: complain, pray and fast, or take action on what I can do,” Batres says.

“I don’t want to beg to stay, but I feel like I deserve it,” she said.

One of the first offices they walked into in Washington D.C. had signs with “Make America Great” and “Trump 2020” around the room. They all shared their personal stories and what they are at stake of losing in spite of the efforts that the president is making against them.

Batres reflected on how she experienced the grace of God upon encountering a seemingly closed-minded woman in this office. Despite clothing her office walls in the voice of a president making an attempt to uproot Batres’s entire life, this woman was open and willing to listen. And despite their differences, Batres says each member of the discussion was at peace by the end of the meeting.

Batres and her group talked with other groups that day who said they did not get the same response, nor did they feel peace like Batres did upon departure.

“I could literally feel the prayer that was around me. I told so many people I was going and I know they were praying,” Batres said after her intensive three days.

Regardless of her fate that lies in the hands of politicians and will be delivered this next year, Batres remains welcoming as ever to the students of Bethel University as she sits behind her desk within the Office of Christian Formation and Church Relations.

Students will frequently peek their heads in her door, flash a smile and give quick wave before scurrying to class. Batres sits back in her chair as the long, tethered brown couch against the wall invites students and staff in.

Above her desk hangs a sign with the words, “God of the impossible.”

0 comments on “Light in the midst of darkness”