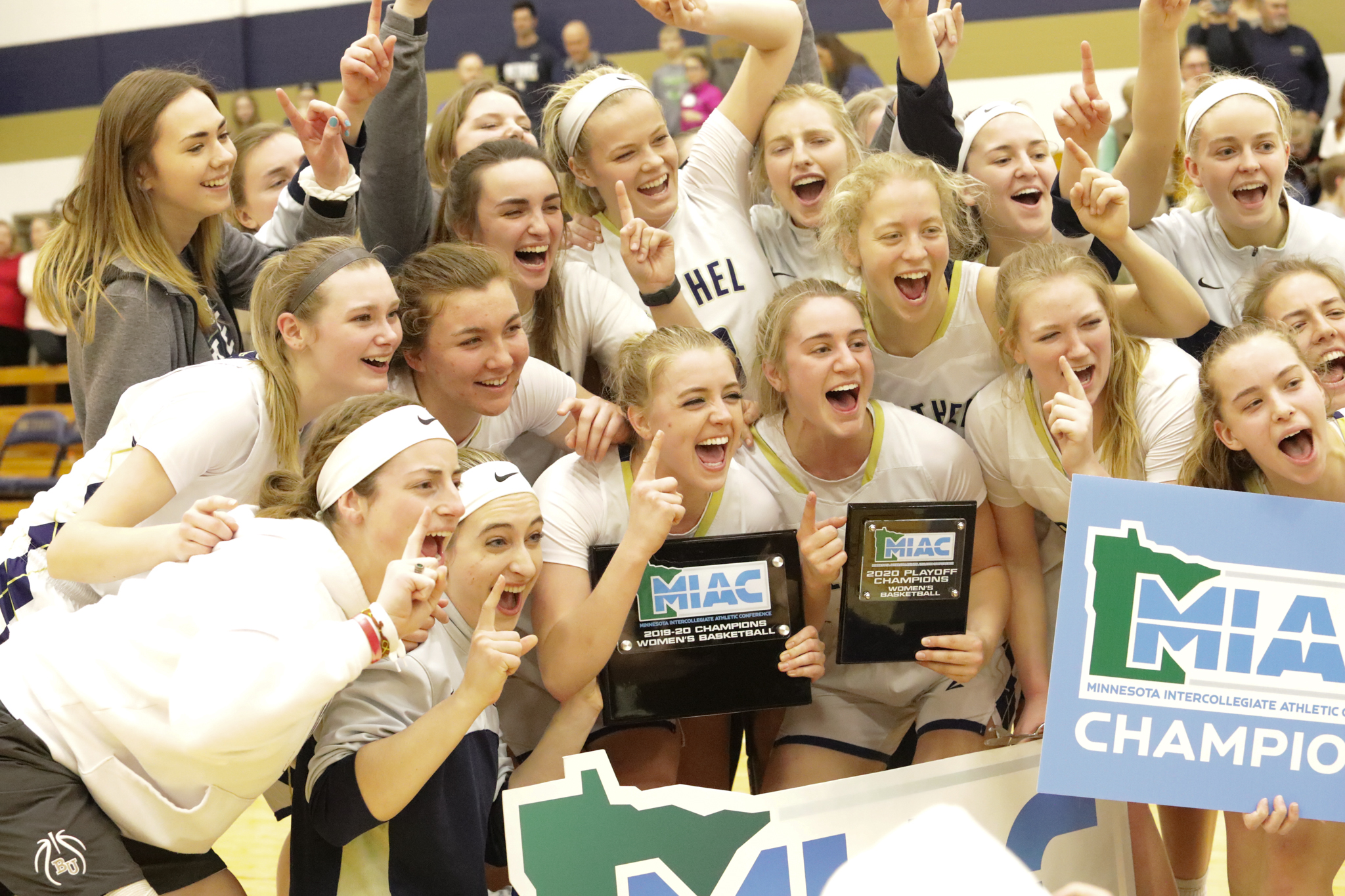 The stage was set.

In a clash of two nationally top 20-ranked teams, the Robertson Center hosted one of the biggest games in the building’s history: the women’s MIAC playoff championship.

The ninth-ranked Bethel Royals, looking for their second-ever MIAC playoff championship, welcomed the 16th-ranked Augsburg Auggies, in search of its first MIAC playoff title and won 72-70 to earn an automatic berth in the NCAA Division III Tournament.

The visiting Auggies jumped out to an 8-3 lead halfway through the first quarter.  Turnovers plagued the Royals most of the first half, but freshman Kat Brown-Erdal scored seven of the team’s first eight points.

As the game moved into the second quarter, the Royals began to apply more pressure in the full-court press, causing the Auggies to turn the ball over. Late in the second quarter, after Augsburg took a 29-21 lead with just under three minutes to go, the Royals used their signature full-court press to wreak havoc on the Auggie guards, turning mistakes into layups and eventually erasing the lead.

The halftime score was the same as it was for the Royals’ semifinal against Gustavus: 31-31.

Junior Elizabeth Schwarz led all Royals with eight points at the half, along with senior Haylee Barker’s team-leading seven rebounds.

A dogfight quarter once again, Augsburg and Bethel went back and forth with mini-runs  until the Auggies looked like they were going to go into the final frame with an extra surge. With the lead 48-42, Bethel ran off six straight points to end the quarter and once again tie the score, this time at 48-48.

In the fourth, the Royals traded buckets with Augsburg. The Royals got two buckets in a row, one from Brown-Erdal, who totaled 15 points, and senior Taite Anderson, who added 11, to grab a 63-59 lead.

Sensing the moment, at the next timeout, coach Jon Herbrechtsmeyer motioned to the Bethel student section, wearing all white, to get loud by raising his arms to turn up the volume dial of the Robertson Center.

With the lead down to two points with less than 20 seconds to go, the ball found Barker and she went four-for-four in free throws to keep the game out of reach.

As the clock hit triple zero, a white circle formed around the free-throw line of the south end of the gym, with its expanding orbit of fans surrounding the new MIAC playoff champions – 72-70 Royals.

For the second time ever, Bethel captured the MIAC playoff championship, the first since 1994.

“I knew it was going to be loud, a lot of cheering,” said Schwarz, who had a team-high 17 points. “We would not have done as well without the fans.”

Barker added a season-high 12 rebounds to help the Royals out-rebound the Auggies 38-26.

Herbrechsmeyer was given the honor of cutting the final piece of nylon from the north hoop. He held tight to that net.

He credited his seniors, Anderson and Barker, for being the catalysts for the team’s success.

“These two seniors have led us and set a vision for this,” he said, holding up the net. “To cut this down.”

Last year, the Royals fell victim to the Auggies three times, including in the MIAC semis, to end their season. Now,  the Royals look toward their next battle: the NCAA tournament.

Seedings will be announced Monday for the opening round of the tournament next week.