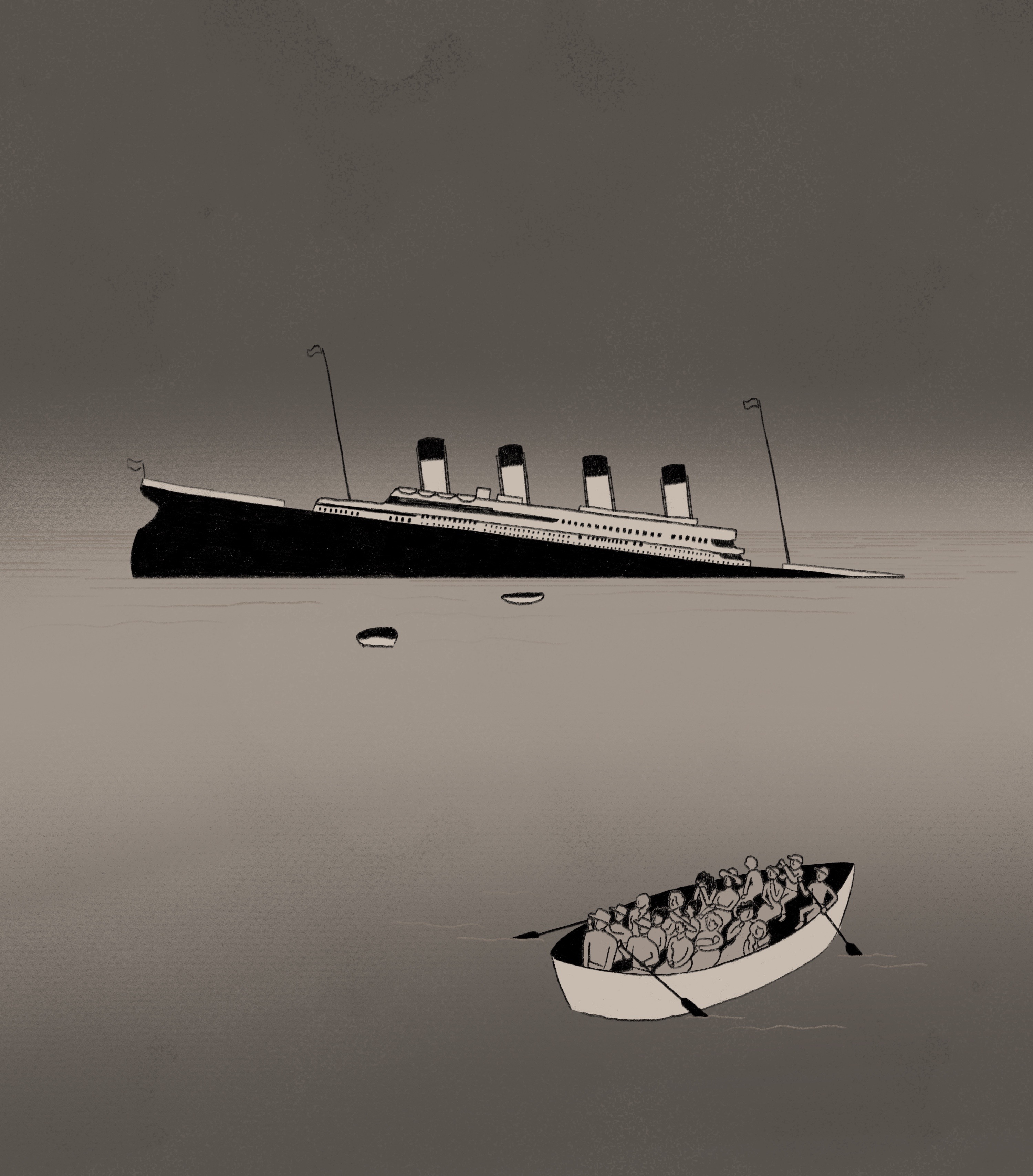 I never cried at the love scenes in The Titanic. I never cared about Jack and Rose—they are both overly curated characters, somehow missing the nuance that make real humans love and accept and think twice before having sex in somebody else’s car. I wasn’t emotional when they almost died in the flooded hallway, or fell into the depths of the black Atlantic. I certainly didn’t cry when Jack spent long hours of the night nonsensically holding onto that board so that his lover of barely 24 hours could live. The whole thing about Jack’s frozen body sinking into the sea and Rose watching him as he goes is sort of ridiculous, in the darkest way.

I only cry at one scene in The Titanic. Early in this three-hour tragedy, a family in the lower cabins calmly, somberly, hopelessly puts the children to bed. The water is not yet seeping up through their floorboards, and still there is a resolute sadness to the moment. These children will not see morning. Their parents will not make any mad dashes for lifeboats. They will never have the opportunity to kiss Leonardo DiCaprio’s icy lips before letting him slip into the abyss.

This family possessed an acute awareness of their position, and I couldn’t help but weep for people who could only accept their fate. Who didn’t fight it.

Sometimes I see Bethel University like The Titanic. Perhaps not as over-the-top as in the film, but there is something about the idea of slowly sinking that I feel in these halls. If we all looked a little harder, we could see the icy black water leaking in through the double doors and those big windows overlooking Kresge.

On the actual Titanic, people had varying degrees of awareness about the slowly unfolding tragedy. While the people on the upper decks were the first ones to gain knowledge of the situation, they were also the first to make the 100-yard dash for the lifeboats. The seats of safety were theirs to claim. There are also lower decks at Bethel—where some people are solemnly putting their children to bed, knowing they will never make it to the lifeboats.

We have disparate access to safety nets at Bethel University. Some people have personal lifeboats in the form of job security or financial benefits or club leadership. Others may tuck themselves into their bed at night knowing deeply that if Bethel goes down, they could lose their jobs, scholarships, or opportunities.

Nobody at Bethel is actually drowning in the Atlantic. But I still think Bethel is sinking, and instead of plummeting all at once into the ocean, Bethel has been drowning over and over again for various different reasons for a long time.

Crippling debt, lack of resources, multiple personality disorder identity and laying off hard-working staff members. We sink. Spray painting on the rock, students in crisis, money spent and money lost. We sink. Committees and councils, building projects and cut programs. We sink. It is blind to ignore how this school is burdened by the weight of monetary dependence and theological discrepancies and a systemic racism and sexism that is written subconsciously and insidiously into our university’s framework.

If I sound paranoid, maybe you’re just closer to the lifeboats. Maybe your floor of the ship is not yet underwater. Some days I feel as though my lungs are filling up with water in this school, and other days I recognize that I can sit back in the comfort of my own lifeboat. The Titanic reminds us that experiences are not universal.

The repetitive story of our university’s struggle cannot be fixed with BSG resolutions or generous donations or student revivals. The progress made on this campus focuses on sometimes seems more like distraction than the system-wide renovation we need. Bethel University’s inability to recognize the root of its pain is causing its population to bear full force of it. We are all put in the position of trying to hold back the Atlantic with a piece of paper, a diploma.

There’s no quick fix. If there was an easy answer, I’d be Bethel’s next president. But we are all here, and that’s a fact. So what do we do?

First, we need to become aware of the sinking. Just because you are not hurting, struggling or noticing the pain in these walls, does not mean that it does not exist. No progress can be made until we start to look down and realize our sneakers are getting wet. Then we need to ask ourselves why. Why did my favorite professor get cut? Why was there an exodus of student senators? Why are most chapel speakers white evangelicals? We need to have the courage to ask questions that make us uncomfortable and go against common narratives.

Bethel has been asking the wrong questions about its problems. Instead of seeking to learn about which Bethel administrators received pay raises during this year of debt, we ask how to get more students to chapel. Instead of thinking critically about the impact of having an all white Board of Governors, Bethel wonders about how to create new academic programs to bring in more students.

It’s time to get off The Titanic. But first we need to see it, and question the structures and systems that created this ship in the first place. And maybe you’d like to think it’s not that deep, but I watched how far Leonardo Dicaprio slipped in the ocean before his body went out of sight. And there aren’t enough lifeboats for all of us.