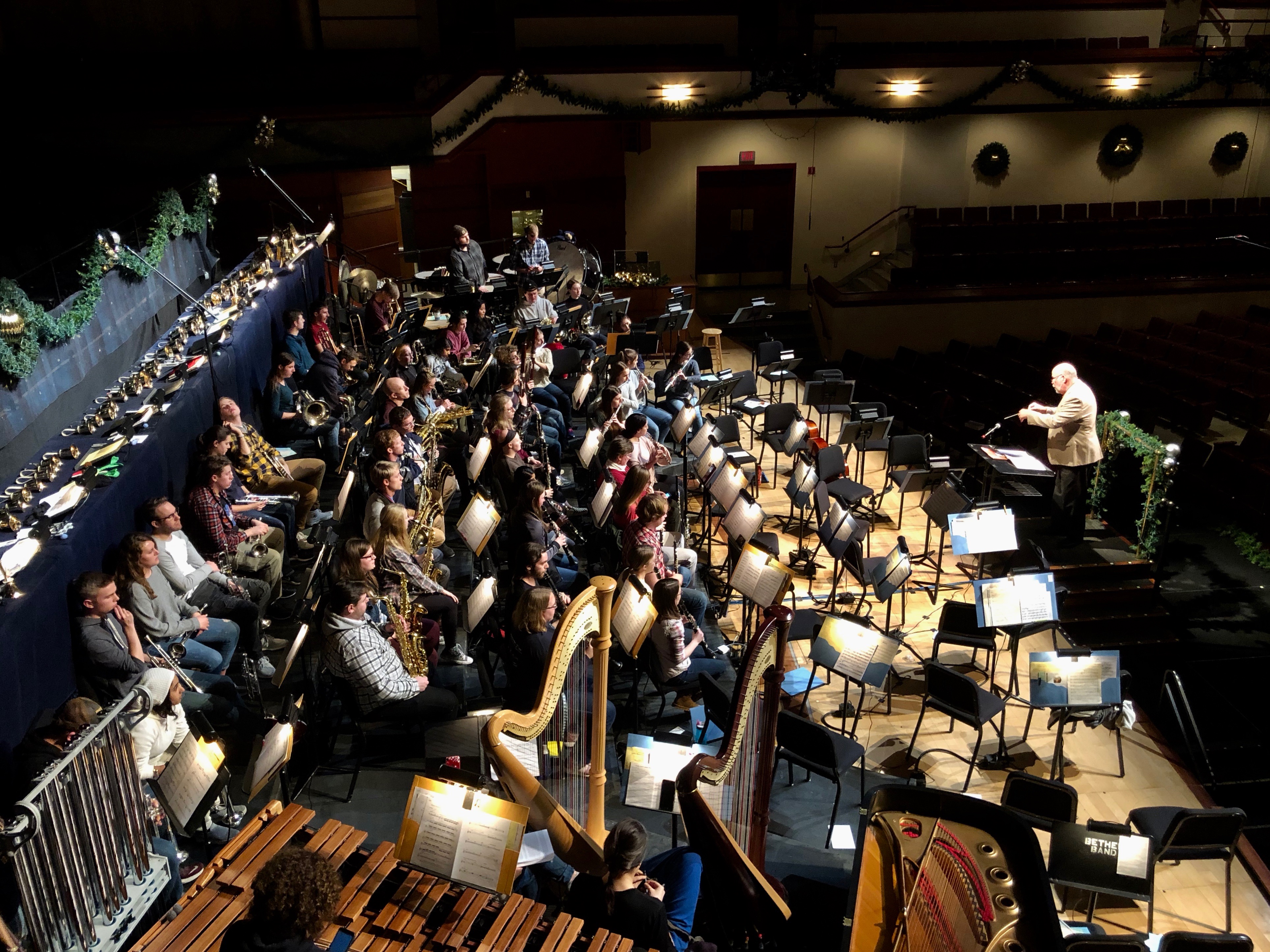 “One day… Eben Reuben and his wife Martha went out to the Skowhegan Fair…” began Bethel University Professor and Wind Symphony Director Steven Thompson. Wind symphony student manager Abbey Sharp stood next to him, barely holding in her laughter as he told the joke that she needles him to tell the band every year.

He tells it with the thickest East Coast-Bostonian accent he can muster, and shaking his head side-to-side as he speaks. The wind symphony musicians sat in their blue carpeted seats on a tour bus in June 2019 in Ireland. They listened to their director speak through a bus-microphone a two-minute joke with deep, well-used smile lines on each side of his eyes.

The punchline? “Back there when you flew that loop-da-loop and Martha fell out.”

Professor Steven Thompson’s journey passed through Rhode Island, small-town Minnesota, Baltimore’s Julliard, Northern Colorado and Iowa before landing him at Bethel University, where he may be as well known for his ability to distinguish Mahler from Mendelssohn in seven seconds of listening as he is for telling a two minute joke best laughed at by the students who call him BFF.

While returning home from Boy Scouts in Warwick, Rhode Island, in the mid-1960s, seventh-grader Steven Thompson stood in the bathroom of an old-fashioned soda-pump drugstore bleeding and staring at the teeth he held. Thompson and his friends had been hoping to stop for a Vanilla Coke. Instead, while racing toward the building, Thompson lost his footing and fell face-first into the window of the store. Thompson stood bloodied in that bathroom, teeth in his hands.

“Oh my gosh, how am I ever going to play trumpet?”

From that moment on, Thompson’s mind was set. The thought of not playing the trumpet mortified him. He knew music and the trumpet would be the driving force in his life. Despite the doubts of the dentist and band director, that seventh-grade-boy in in Rhode Island bathroom did play the trumpet again.

As a toddler, Thompson’s mom brought home a toy record player. It had a carousel of pictures on it, but it was the music that mattered. Thompson would sit quietly on the living room floor for hours, intently listening to the music, sitting completely still. As a 10-year-old, his dad came home from work with a book and record of The Magic Flute by Mozart; Thompson was captivated.

Not long after, a coworker of Thompson’s father became a widow, and was left with a collection of classical music records she had no use for. When his father pulled up with more than 25 records of the world’s greatest classical works, Thompson did not waste a second in getting one on the family record player. He listened to those records until they were all-but worn out. The collection still holds a place in Thompson’s heart and bookshelf.

In his hours of listening to those records, Thompson was introduced to the 20th century Russian composer and the father of modern-day band music Igor Stravinsky. Stravinsky’s The Firebird hooked Thompson irreversibly. Stravinsky’s composition was so captivating that as a high schooler Thompson visited the library in Providence, Rhode Island combing through every recording and book regarding Igor Stravinsky.

In 1971, Thompson traded East Coast accents for midwest winters, attending Wheaton College in Chicago, Illinois, for his undergraduate degree in music education. After graduation, newly wed Thompson and his wife moved to Emmons, Minnesota, a town hugging the Iowa border with less than 400 people, and a Post Office whose first letter came in 1899. He was teaching K-12th grade music.

In the midst of a summer break from teaching, Thompson flew from Emmons to Baltimore to play trumpet in his best friend’s wedding. Thompson stayed with his cousin Debby, who lived within walking distance of Peabody Institute of Johns Hopkins, Baltimore’s Julliard. Peabody heard auditions that day for their master’s program, and Thompson decided to go for it. His previous audition at Northwestern University had been sabotaged by a 101-degree fever and an Illinois snowstorm. Thompson wanted more experience of auditioning under pressure, and a school like Peabody provided an excellent opportunity. He auditioned self-assured he would not be attending.

“I wasn’t nervous because it didn’t mean anything,” Thomson said.

Afterward, a man in a suit strode up to Thompson, confidently shook his hand, introduced himself as the director of admissions, and asked Thompson to go on a walk.

“I’m sorry, I have really bad news,” the director told Thompson, “I don’t have any full scholarships left, or I’d give you one. I have one half-scholarship left. Would you take it?”

The man in the suit’s offer shocked Thompson.

“I didn’t have any intention of going there. I didn’t think I would get in!” said Thompson.

He needed to make a call to his wife Carol.

“They want you to come?!” she exclaimed through the phone, equally astounded.

Six months before his audition at Peabody, Thompson had auditioned for a young artists’ competition put on by the women’s association of the Minnesota Symphony Orchestra. The principal trumpetist for the Minnesota left a scathing review for Thompson, declaring that he needed a different career.

“It was horrifying. I was disappointed, but I didn’t really doubt myself, because I thought I played pretty well,” Thompson said. “It was ironic that six months later I got into Peabody.”

In 1979, he left the Iowa border for Baltimore and Peabody, where Thompson would be learning from and working with some of the best professional musicians in the field; Thompson studied, played trumpet professionally with the Annapolis Symphony, and sang with the Baltimore Symphony Chorus.

Thompson left Baltimore having benefited from rubbing elbows with great musicians. He then spent time teaching high school band in Connecticut and Minnesota, worked in classical music radio stations, and got his Doctorate in Colorado. In 1986, Thompson began his college career teaching at Waldorf College in Iowa.

Before Thompson, the Bethel University band had cycled through five professors in four years. Music and Theatre Department Chair John Veenker recalled the day in December 2001 when Thompson visited Bethel and conducted the band. For Veenker, the decision was easy.

Thompson had the technique to handle conducting anything from John Philip Sousa to Gustav Holst, a story to go with every piece of major band literature and the ability to inspire a band he had never worked with before.

“There was more to it than just the technique, it was how the technique connected with the group and they were able to make music right away,” said Veenker.

And so, fall 2002, Thompson came to Bethel University excited to begin at a new institution. A cancer diagnosis prevented him from beginning the school year on time. Thompson was in a new city with a new job and a new disease that shook him to his core. After taking time for treatment, Thompson began that year differently than imagined.

“It was not an easy transition, but I loved [Bethel], and God smoothed out the wrinkles,” Thompson said.

The band recently played a work titled Rest, Music major Alyssa Pecoraro recalled. Thompson shared that the last time he had played this work was at his father’s funeral. His mother would be watching the live stream of their performance, but she didn’t know they would be playing this piece.

After getting one clean run-through in rehearsal, Thompson set down his baton with tears in his eyes. “Remember this piece is more than just notes on the page,” said Thompson.

Every time Steven Thompson walks through the music department wearing his grey cabbie hat from Ireland, there is usually an echo of students calling loudly “Hey T,” greeting him by the name his students best know him by. Abbey Sharp, the Student Manager of the wind symphony, sitting in the table in the corner nearest the band room launches a greeting a different nickname for the conductor: BFF.

This nickname was earned not by Thompson’s choice, but by Sharp’s. She had been playing as part of the pit orchestra for the musical, which Thompson was conducting, and one day, Sharp jokingly told him he was her BFF.

“He was very argumentative at first,” Sharp said. “After awhile he just accepted it and started calling me BFF as well.”

More stories of Thompson’s antics at Bethel and beyond are not in short supply:

Thompson’s runs rehearsals like the captain of a ship and goofy, loving father – all rolled into one.. The band begins with No. 19, an exercise from a scale book that every band member has, and will have memorized before they get to their first performance.

Before rehearsing the pieces for the day, often a devotional is shared by either a student or Thompson himself. During moments like these, Thompson shares personal stories, and connects music and his faith, allowing students an authentic view of who he is. It is not uncommon for the students to see a mist in his eyes as he shares with them.

Thompson then jumps into the serious business of music-making.

Thompson has a theme, a purpose and a goal for every piece. He knows where the triangle hit rings out in measure 92 and doesn’t hesitate to have the band repeat and replay until the oboe in the The Wild Goose by An Ge Fhiain sounds like the Holy Spirit.

Finally, Thompson will pause after the last piece, turn and look over his right shoulder at the kitschy musical wall clock that given him as a gift from his students, and say one word “Bye.” Rehearsal is over. Usually 35 seconds late.

Back to that joke.

“One day… Eben Reuben and his wife Martha went out to the Skowhegan Fair…” Thompson began.

He continued to tell of a $10 “aeroplane” ride whose fee would be waived if the passengers could make it through the ride without saying a word. The pilot reluctantly returns the $10 fee to his successful passenger when they return to the ground, asking if there wasn’t even one moment when he wanted to say something. Eben Rueben admitted there had been one moment.

The punchline? “Back there when you flew that loop-da-loop and Martha fell out.”