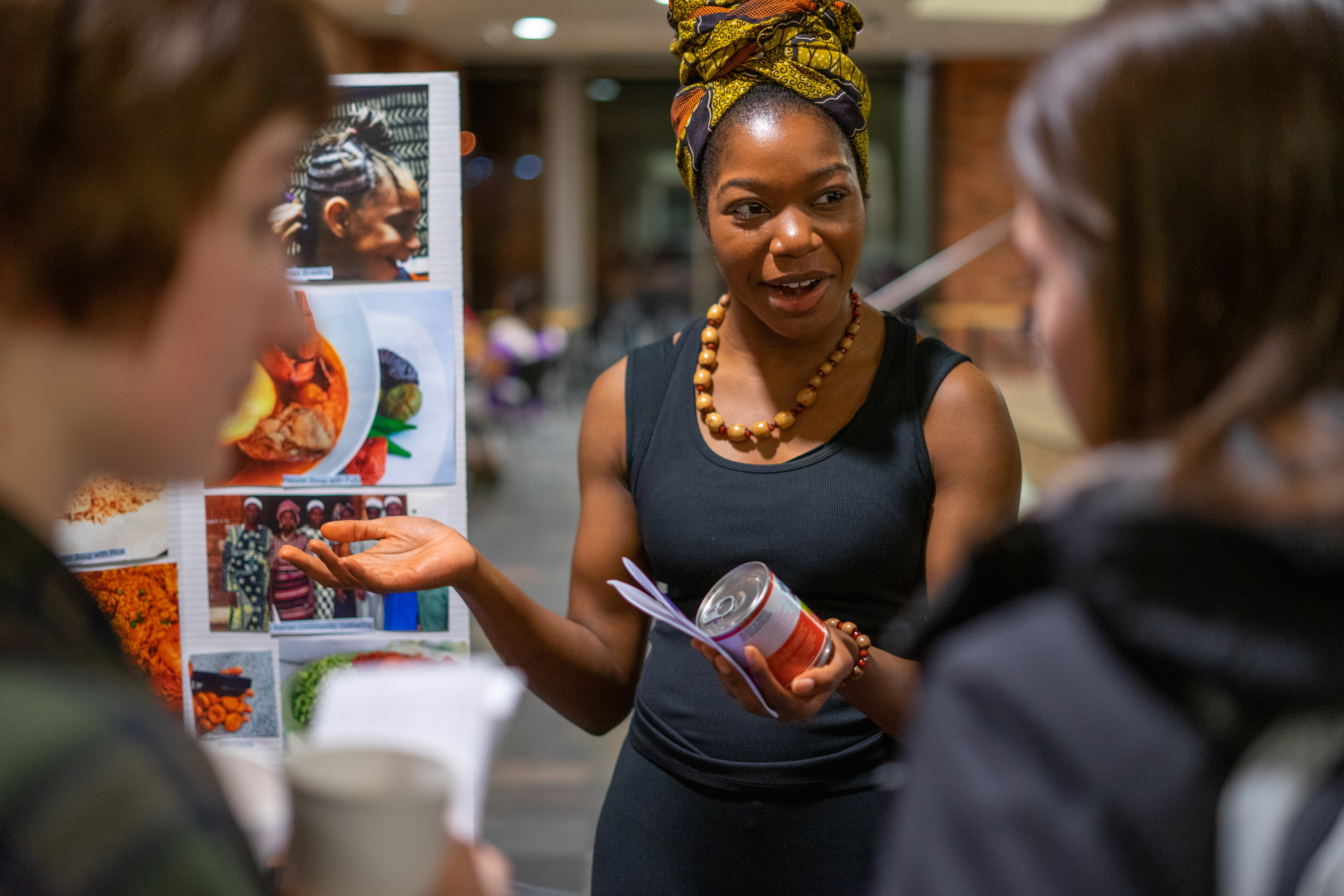 At Thursday’s Multicultural Festival, several cultures at Bethel were represented through dance, music, art, food and clothing. We asked everyone to tell a story that defines their culture. Here are their stories:

“[There are] contrasting ideas between [my culture] and white culture, especially being here at Bethel. I’m wearing a turtle shell around my neck and it’s filled with tobacco. It’s for ceremonial purposes only. Tobacco was said to be the first gift given to us on Earth, and so everytime we see something that’s dead or a tree that’s fallen, we lay tobacco, say a prayer and say thanks. The turtle shell, however, is a commitment to a holistic lifestyle. It’s a commitment to using everything the Lord has given us, what our Creator has given us – not just something that’s here for us to throw out. The main difference that I noticed, coming here especially, was waste. Back home, we do as much as we possibly can to eliminate all waste. We don’t do food waste, and if we do, we compost it. Or if you kill an animal, we use the entire animal. We use everything – we use the meat, we eat the meat, we use the leather for clothing – all of it is used. And so coming here, there was a lot of waste. It was very curious to me as I was raised knowing that my God, the Creator, gave us things to use for our benefit, and gave us a planet to live on and see his beauty everywhere we look. And I came here and was surrounded by people who almost sought to destroy it.”

“I always have memories of Svenskarnas Dag, which is a Swedish festival that takes place in Minneapolis every single summer at Minnehaha Falls. It’s just a chance to bring the Swedish culture together – they have food vendors and dance and music. For me, growing up in a predominantly white society and having a European American experience, I learned how important it is that I understand my culture. That’s given me a chance to be able to break down some of my culture’s beliefs and values and then also get more opportunities to go to the American Swedish Institute in Minneapolis and do other activities.”

“I moved here when I was little, so I went to predominantly white schools. In Asian culture, a lot of parents don’t express their love verbally, and a lot of times it’s expressed through food. I just remember coming back home if I had a rough day, and [my mom] would make tteokbokki (spicy rice cakes), just home-cooked Korean food. When she’d pack me that for lunch, too, it was encouraging for me to make it through the day and come back home. It’s just a symbol of what my mom gave to me from her motherly role, and I’m hoping that I can keep making this dish for my kids someday, too.”

“We have a homestead in Norway, and there’s a book that my great uncle wrote. The book shows the family homestead, and we actually still have family over there. They came here to Minnesota last summer, and they had tater tots and meatballs, and they were just kind of surprised by the whole thing and they didn’t know what it was. It was a really cool experience to see what that side of my family is like over there. I learned how great culture can be and the generations and generations of my family that are still there and how that’s been passed along.”

“When you marry a Nigerian woman, you have to pay a dowry. And when you pay a dowry to the family, that makes it unique. You don’t do that here. You just do the wedding, maybe at the church with a ceremony, and that’s it. But over there, you have to meet with the family and they will tell you what you need to pay. Once you pay, then you can have the woman as your wife.”

“Greeting people is a big part of our culture. Just acknowledging people’s presence. When I come home, I’ll greet everybody in the house and acknowledge that they’re there. That’s the part of my culture that I like most. It kind of makes us together more.”

“We’re very big about family and remembering where we come from, because essentially that’s who we are. I think something that’s really beautiful about my culture, especially with my grandparents and my mom, is that they have always reminded me of my roots. Because that’s what defines us. Our roots are determined, hard-working and passionate. We’re also really big about food. Tortillas and beans are a really big part of our culture.”

“I have five brothers and three sisters and my parents. They’re all from Liberia, and I’m the first one in my family to be born in the U.S. in Minnesota. A lot of them came here after the second civil war in the late 1900s. So my family came here about 25 years ago – and not only them, but millions and millions of other people are currently in the U.S. who are Liberian. If you go to Brooklyn Park, for example, there are so many Liberians. They call it “Little Liberia.” Wherever you go, you’ll hear them speaking or see five, six African shops there. I love the food, too. I kind of consider myself Liberian-American, but I can’t fully say I’m Liberian and I can’t fully say I’m American. I think growing up, it was like, ‘Do I hang out with the Liberian kids?’ But I can’t, because I can’t talk about Liberia. ‘Do I hang out with all the other African-American kids?’ But I can’t, because I have this African-rich background. It was hard to maneuver around that and find the middle. So I just hang out with both.”

“The flag represents the Karen people and its subgroups. The red color represents bravery, the white represents purity and the blue represents honesty. We’re originally descendants of the Mongolians, and we migrated down to China. Then, from China to Burma, which is now called Myanmar. We stayed there for a while, but because of the civil war that is still ongoing, a lot of our people are now residing in Thailand refugee camps. Some of the people are back in the homeland of Myanmar, and they’re in the forests, not in the cities or anything like that. Right now, as we’re talking, Karen people are still running and hiding in the forests. St. Paul has the largest population of Karen in America, and the rest are scattered throughout the world. We love our history and we adore our languages – the younger generation tries really hard to keep our languages. Even though there are some of us who are not fluent in Karen, we still keep the culture and we still tell the stories. We are very thankful for that, even though we have been oppressed and have been through genocide for over 73 years now. We don’t want to be forgotten. We want our culture to shine bright.”

“In India, most the families will live in one house and cook in a big pot and will eat together.  If we make any special dish we will share with our relatives and neighbors. During Festival and special events we will make deserts and traditional food and will send it to our friends and families. All the houses are close so we can go to our neighbors house anytime and chat with them. For weddings the girl’s family have to give dowry to the groom to get married. The son has to take care of the parents their whole life. Then son’s parents can live with their son’s family even after marriage but daughters can’t. Daughters will stay with their parents until they get married. I miss only my family, not food, because I am cooking Indian food at home everyday. When I was in the flight [to the United States], literally I cried. I missed my friends and family. Now, I’m OK.”

“I grew up speaking English. I actually got kicked out of school because I didn’t know enough of my native tongue so I had to go to another school to learn. When I learned [Hindi] that’s how I talked. Coming here we just try to keep the language alive. A lot of it is collectivism because here it’s very individualistic. We try to keep the family gatherings alive. As we age, especially when we’re in college, my brother and I are away from [family] for school and stuff. My family really values being together so we still try to always come together at least every week or once a month. It’s really important just to be together and my mom really enforces it otherwise we’re in trouble.”

“Colombia is a very culturally diverse place. One of the places my grandpa brought me to was a big city called Bogota. It’s pretty much the New York of Colombia, and it’s a pretty economically diverse place. It has a bunch of small businesses, but with all the violence that’s going on right now, it’s very difficult to control big businesses overtaking small businesses. So even though it’s very economically boosted right now, it’s hard to start a business at all. My grandfather had to move out of Colombia to start his own business, which was a taqueria. He’s a very big fan of Shakira, who’s also from Colombia. He likes dancing a lot to very upbeat music. I like to too, of course, but not as much as him.”