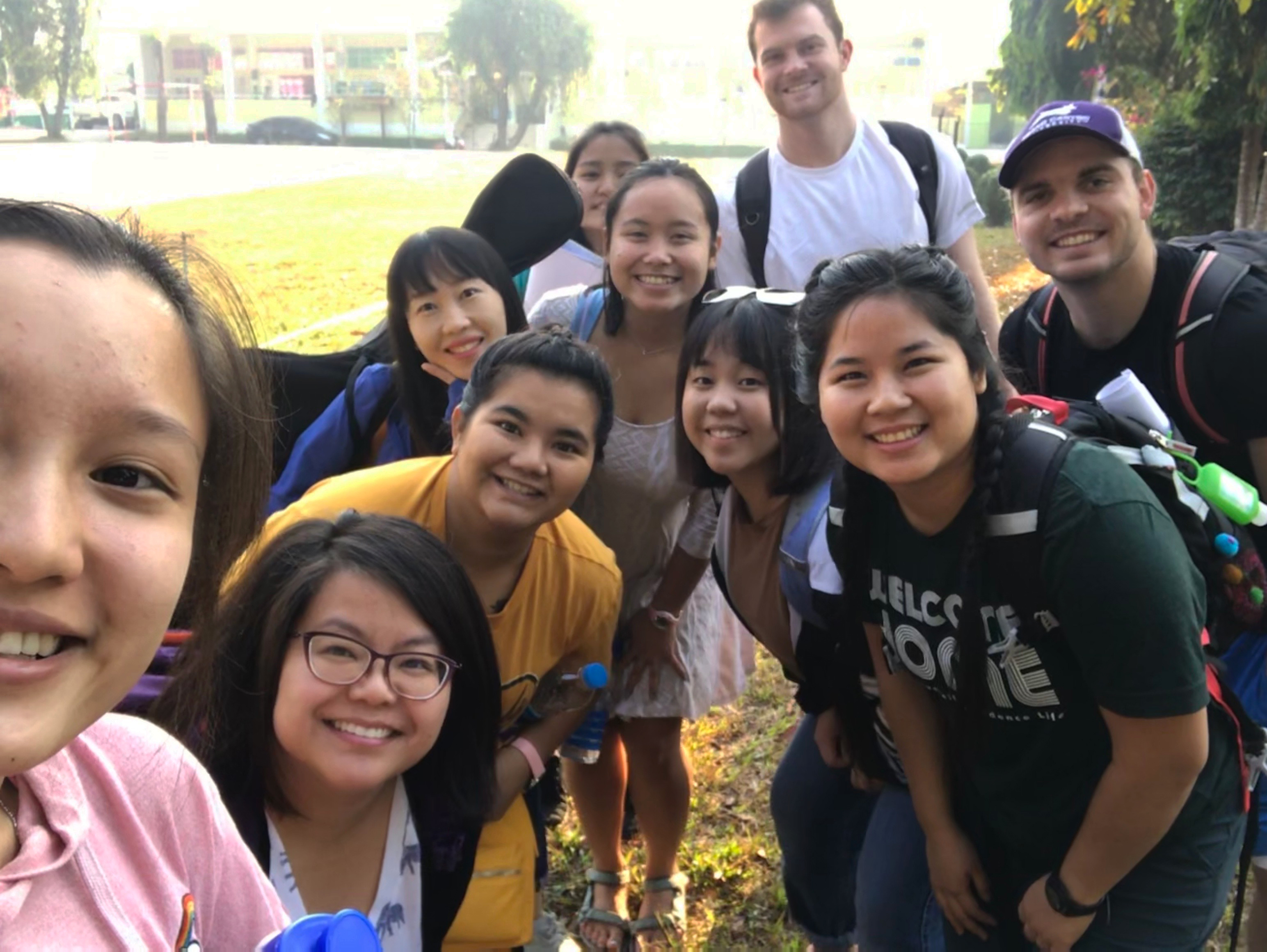 After eight months planning a mission trip, her feet finally hit the ground. A ground Nahpay was familiar with. Nahpay was born in a Thailand hospital in 1997, and 23 years later she returned to serve the community she loves.

The smell of grilled pork and sticky rice filled the air as Nahpay walked through Bangkok streets with her team of six Bethel students and two Bethel staff. She spotted a Karen worker at a mall and a cook at the airport; people who share her ethnicity.

“Every place I go there’s Karen, and my heart melts every time,” Nahpay said as they stayed in Bangkok and the district of Mae Ramat in western Thailand.

The Karen people, pronounced kuh-ren, are originally from Burma, but were forced out of their homes in the 1990s by Burman military groups. Refugee camps were built in Thailand to house the Karen people. Nahpay’s mother was pregnant when her family fled their home. Nahpay was born in a Thai hospital without any other family around in fear of being arrested by Thai officials for not being citizens.

Nahpay spent the first 10 years of her life in the Tham Hin Karen refugee camp in southwest Thailand, which she describes as less of a home and more like a “nightmare.” But the people, her friends, family and neighbors, gave her hope. When her father applied for citizenship in the US in 2007, they moved, but her mother stayed behind.

Nahpay hasn’t seen her mother for 17 years, relying on Skype to talk to her. She hopes to reunite with her and others still in the camp someday, as well as work with Karen communities in Thailand and Burma. In December she got a taste of that dream.

Her dream started to become reality during Nahpay’s junior year. While eating fresh mango in Costa Rica for a spring break mission trip, Nahpay remembered the place she was born and thought, “Why not Thailand?” With encouragement from Associate Dean of Spiritual Formation

When her friends and fellow Bethel students Pay Poe and Ratsamee Thosaengsiri approached Nahpay with the same dream to go back, she knew it was the right time.

Pastor Runion and Diversity and Inclusion Associate Pang Moua trusted Nahpay with the task of planning the trip and finding participants. She asked people who she believed had a passion for the Karen people and wanted to serve overseas.

By sending support letters, serving at the Festival of Christmas and making 2,300 egg rolls for a fundraiser, they cut down a $3000 fee for each member to $300.

“It happened through teamwork, the faith we have in God and the faith God has in us,” Nahpay said.

The team of nine left December 23 for Thailand and arrived just before Christmas, a holiday most Karen people don’t celebrate.

The team adjusted as they sang Christmas carols in Thai, English and Karen, languages some didn’t know, in hopes to teach the children who follow Buddhism there’s more to Christmas than presents and Santa Claus.

The team travelled to the Mae Ramat district in western Thailand to work with Karen and Thai communities. They partnered with Ratsamee’s sisters Mary Thosaengsiri and Prakaifa Thosaengsiri, who volunteer with Christian foundation Empowering Dreams Foundation (EDF) to serve the Karen students who are in the care of EDF. Their mission is to support Karen children to pursue education.

“We were not there to fix or to preach, but to engage in that community,” Nahpay said.

She simply wanted to listen. Like the time the Bethel team visited their first Karen worship service where one of the youth from Mae La refugee camp shared her testimony of persecution.

“We were doing a lot and we had a moment just to sit and hear about their own testimony and how dedicated they are,” Nahpay said. “It’s incredible. Her family is not Christian. They are trying their hardest to make sure she doesn’t accept Christ. She owns her faith and is willing to sacrifice to maintain her relationship with Christ.”

Nahpay noticed the difference in Thai and American culture, where Americans follow a ‘I’m not mean to you but I’m not close to you’ mindset. The kindness Karen people shared with strangers, greeting each other with familial names like uncle, grandma and grandpa struck Nahpay and she hopes to practice that here.

The team arrived with an outline of the trip, so many days Nahpay had to make decisions about the agenda.

Moua was impressed by Nahpay’s sensitivity to the opinion of the rest of the team during those “driveway moments.” While leading her first mission trip, Nahpay kept her favorite Bible verse Colossians 3:12 in mind to “clothe yourselves with compassion, kindness, humility, gentleness, and patience.”

She’s thankful for the team’s “willingness to learn in an unknown place and open their eyes, heart and mind to what God wants and to partner with people.”

Pang Moua, who acted as Bethel’s representative and supporter for the team, joined them in September. She set tables at the Festival of Christmas and rolled egg rolls alongside the team.

Moua described their ministry as a mixture of “beautiful moments of worship and practical moments like handing out basic common goods.”

Each morning started at 5:30 to connect with church services, sing hymns and hand out clothes and food like sweet fruits, candy and pop.

Moua was struck by the confidence of Nahpay and teammate Ratsamee standing on stage in front of about 300 Thai children teaching them English words by shouting across the auditorium.

“I wish all of Bethel was able to see what I saw in Kugay and Ratsamee’s leadership as they stood in front of the whole faculty and kids,” Moua said.

During a visit to a Karen home, Pay Poe opened the service in prayer in Karen.

“It was so beautiful to see her lead them all in prayer,” Moua said.

Moua saw that God was already at work in Thailand through the church services in Karen homes where the families sang hymns without need for hymnals.

0 comments on “A taste of home”