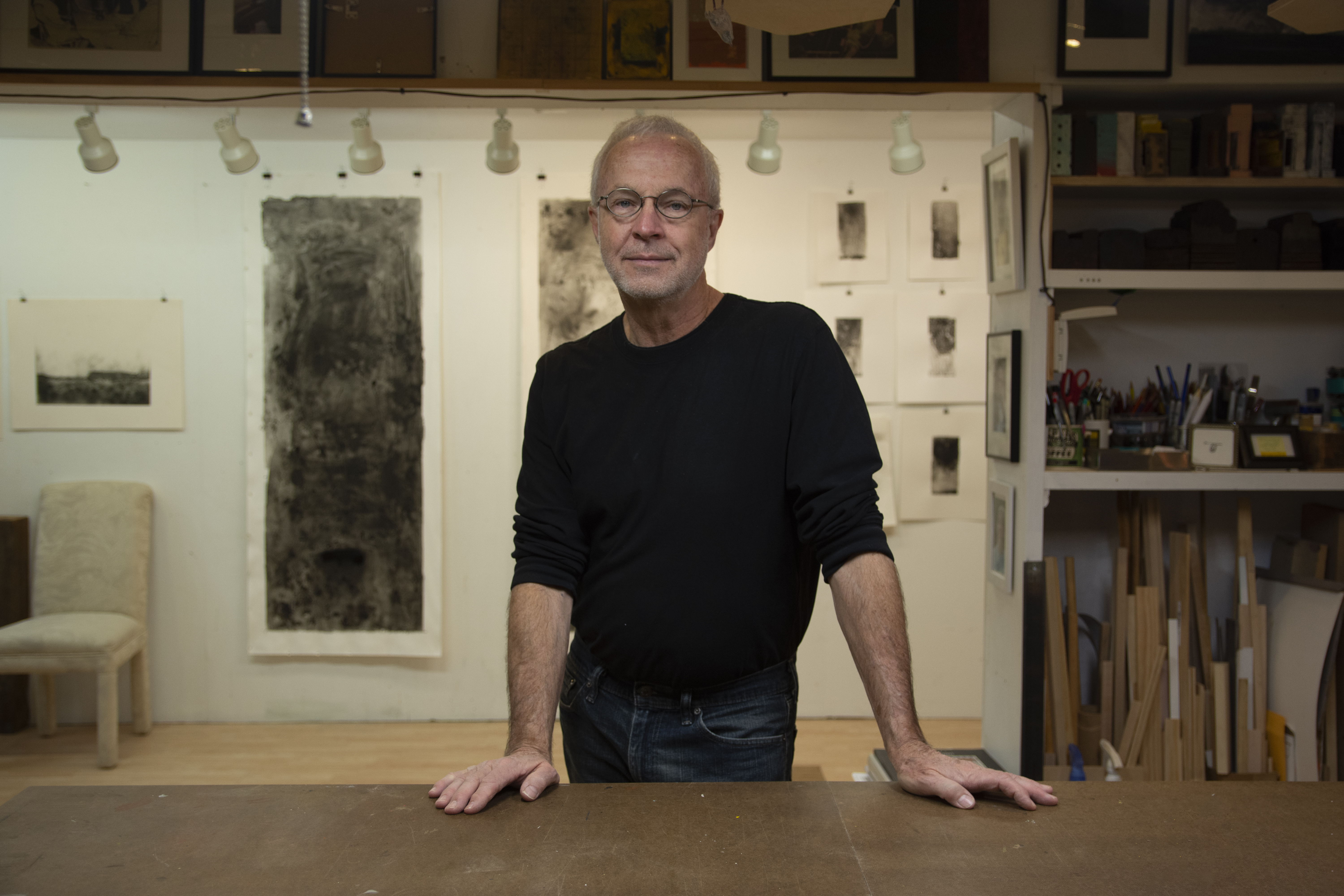 Wayne Roosa, art history professor, retires after 37 years. His students and colleagues reflect on his impact at Bethel through community and art.

In a suburb of New Brighton sat a seemingly ordinary Minnesotan home, at least on the outside. The inside, however, was filled with paintings of all shapes and sizes, ceramic coffee mugs and hundreds of paintbrushes. Some dried flowers hung from the ceiling and Wayne Roosa, a retiring Bethel art history professor, leaned up against a wooden table and pointed to the human-sized, rectangular artworks on the wall.

“These are my soul paintings,” said Roosa. “Each one is a sort of meditation on a soulful state.”

Roosa’s studio reflects an idea he had for his current exhibition Mattering the Soul in the Olson Gallery at Bethel. The exhibition expresses Roosa’s idea of coming together as a metaphor for where the ordinary meets the transcendent.

Mattering the Soul showcases Roosa’s artistic talent and deep thought process, which can be traced back to his college days.

“I started out as a philosophy major,” Roosa said. “But it was too abstract, so I decided to become a studio [art] major.”

After the switch, Roosa graduated from the University of Colorado with a bachelor’s degree in both art history and painting.

Following his graduation, he moved out east to complete his graduate degree at Rutgers University. During his last year, Roosa became the first Rutgers student to receive a fellowship at the Metropolitan Museum of Art in New York City.

Roosa might have stayed on the east coast, but a job offer 37 years ago from Bethel University brought him to Minnesota, a state he had never stepped foot in. Roosa wasted no time and immersed himself into the Twin Cities art scene, familiarizing himself with places like the Minneapolis Institute of Art and Midway Contemporary Gallery.

“People go to big museums and think they have to see everything,” Roosa said about the Twin Cities art scene. “But I like to go in shorter periods and just look at one set of galleries and get coffee and meet people there.”

Meeting people and forming relationships is an integral part of Roosa’s life. Whether in an art gallery in Minneapolis or with the students and faculty at Bethel, Roosa’s intentionality is evident based on the lasting friendships he built over the years.

John Silvis, an art adviser and museum curator living in New York City, is a former student and colleague that Roosa has remained in touch with for more than 25 years. In the early 2000s, Roosa and Silvis became co-founders of the New York Center for Art and Media Studies program.

“[Roosa] has a very gracious and inclusive way of treating his colleagues and students,” Silvis said. “That definitely helped me in my own professional life and how to handle ups and downs of dealing with different people.”

The number of students that Roosa has stayed in touch with is a testament to his intentionality. Another former student, Chris Larson, studied under Roosa from 1986 to 1989, and the two remain friends to this day. Larson remembers when Roosa wrote the lead text in a comprehensive catalog of Larson’s work, years after his time at Bethel.

“[He] made connections in my works that I was unaware of, which made it difficult for me to proceed with my next body of work without hearing Wayne’s influential voice in the back of my head,” Larson said.

“Before COVID, I was supposed to go to Paris to do art,” Crow said. “[Roosa] gave me a travel itinerary and was like, ‘All right Lydia, that should be enough to keep you out of trouble.’”

Roosa has also formed a community with the faculty in the art department. Art professor Lex Thompson commented on the influence Roosa has had.

“Within our own area he has been instrumental in shaping who we are and what we do,” Thompson said. “[Roosa] was a part of the hiring process of every faculty member in the department. He has led us with his calm, caring and shrewd mind through feast and famine.”

The art department is grappling with the recent budget cuts. An art history professor with a Ph.D. will not be replacing Roosa – instead, adjuncts will take his place. Other cuts were made in the art department too, including the loss of ceramics professor Heather Bren and the art education program.

“When they cut theatre my freshman year, I knew they were going to come after art, so I was kind of holding my breath,” Crow said, who is a part of the art education program.

Still, Roosa remains optimistic about the art department’s ability to handle these challenges. His understanding of the fluidity of present changes is evident in Mattering the Soul.

While he is adjusting to the change retirement brings, he will continue to spend his days in his studio, creating artwork and writing. His soul paintings provide a glimpse into how his art might differ in the future.

Larson made a note of how Roosa’s exhibit feels different from past works.

“He’s using a different approach to making,” Larson said. “It’s spiritual, coming from deep down in the soul, far far away from the head.”

Back in his studio, Roosa came upon his soul paintings again and commented on the distinction of each one.

“I don’t want it to be too pretty,” he said. “I like a little bit of raggedness.”

0 comments on “A meditation on a soulful state’”