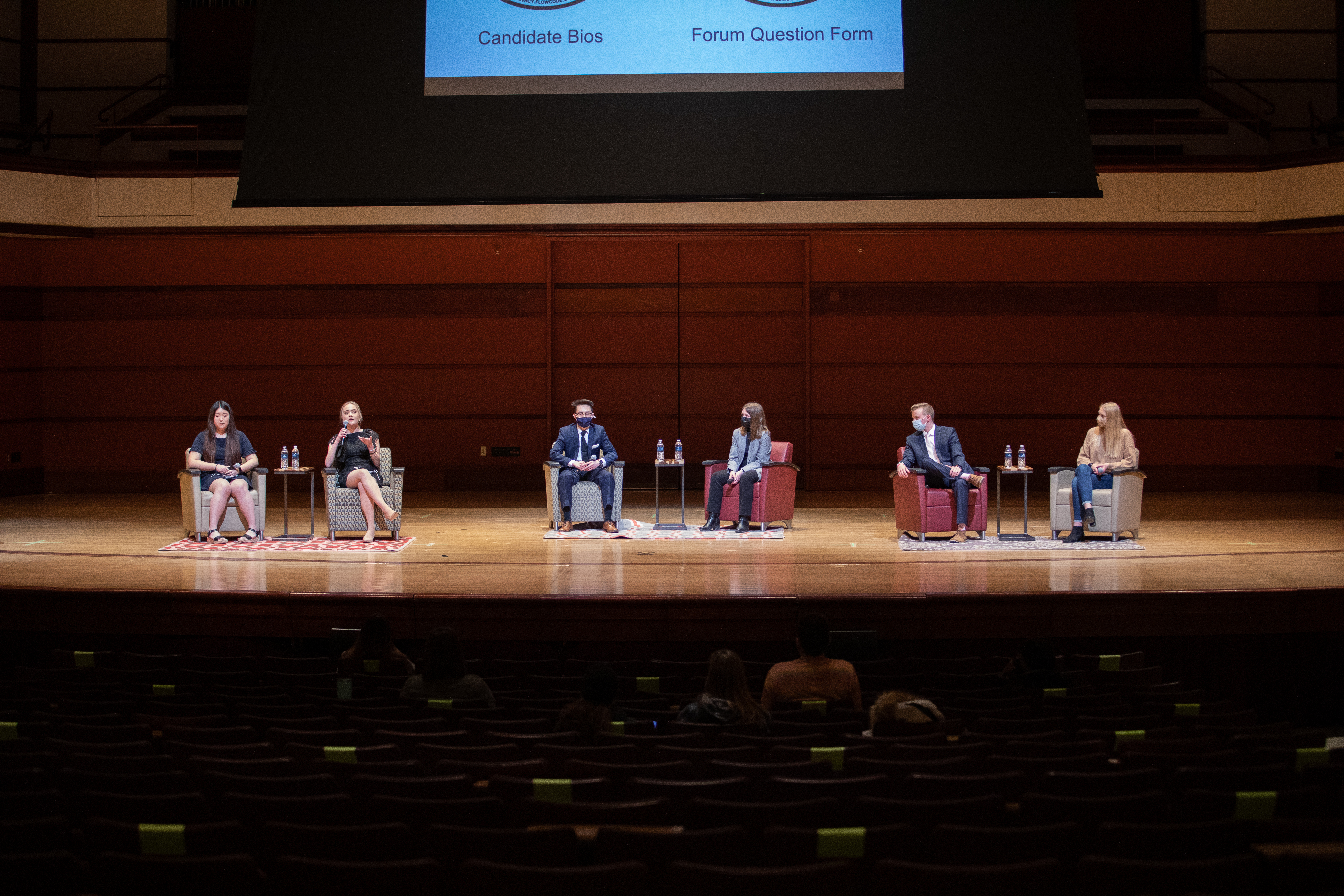 Students listen to BSG candidates talk about Christ, community and conversation ahead of voting next week.

Senior Jessica Eveland knows she will not be at Bethel University next year. But as 9 p.m. rolled around on Feb. 23, Eveland was among multiple students sitting in chairs marked “Approved for Use” in Benson Great Hall while other peers viewed an online stream. Popcorn in hand, Eveland joined the cameras, her eyes focused on the candidates for next year’s Student Body President and Vice President at the candidates forum. Eveland and her friends know the coming election extends beyond next school year. Voting will be held Wednesday Feb. 24 from 8 a.m. to 10 p.m. online and in the Brushaber Commons from 11 a.m. to 4 p.m..

“I realize we have a legacy to leave behind now,” Eveland said. “I don’t think I realized that coming in as a freshman. I care more about what happens from here.”As the three pairs of potential presidents and vice presidents, Alice Hong and Tarra Snyder, Blake Birno and Marissa Cutlan and Sam Nguyen and Carolyn Ziebol took the stage with opening statements, students gained insight into how their vote could shape a legacy at Bethel in the coming years. Though each pair brought fresh aspirations to the discussion, the night was dominated by three unifying themes: Christ, community and conversation.

“Bethel University is a Christian community, and too often… we put that on the back burner,” Hong said. “We want to put that on the forefront of everything we do in BSG. Jesus was a voice for lepers, for the ones who were excluded in society.”

While discussing the integration of faith into the role of president, all of the candidates expressed a focus on Jesus’s love. Hong and Snyder hope to inspire students by incorporating Scripture and prayer into BSG emails. Birno and Cutlan plan to create an “open hour” for students to voice concerns and ideas in order to strengthen the community. Nguyen and Ziebol called for representation of commuters, PSEO students, and minorities through additional space for their voices to be heard.

“I want to increase spaces to have dialogue for those who aren’t part of the majority culture at Bethel,” Nguyen said. “I want [the CCC] to be a place where people have tough dialogue but also connect and build bridges.” An expansion of the CCC was touched on by all six candidates, whether it be a physical relocation to a larger space, as Nguyen suggested, or the growth of platforms and resources for minority students on campus, as Hong discussed. But calls for new and challenging conversation pushed beyond the narrow walls of the CCC to the campus as a whole.

“Right now, a lot of people are on polarizing sides,” Ziebol said. “We want to be able to bring people together by giving them the opportunity to talk about these issues… and understand that we’re all children of God.”

Following a year of intense political tension on the national scale and masked, socially distant interactions on Bethel’s campus, the need for a unified community became the candidates’ primary concern during the forum. As the discussion came to a close, the similarities in platform between candidates stood as a reminder of the unity that can and does exist at Bethel.

After sitting down and listening with an open mind, Eveland left with confidence in her own vote: a vote that will make a change beyond her time at Bethel.