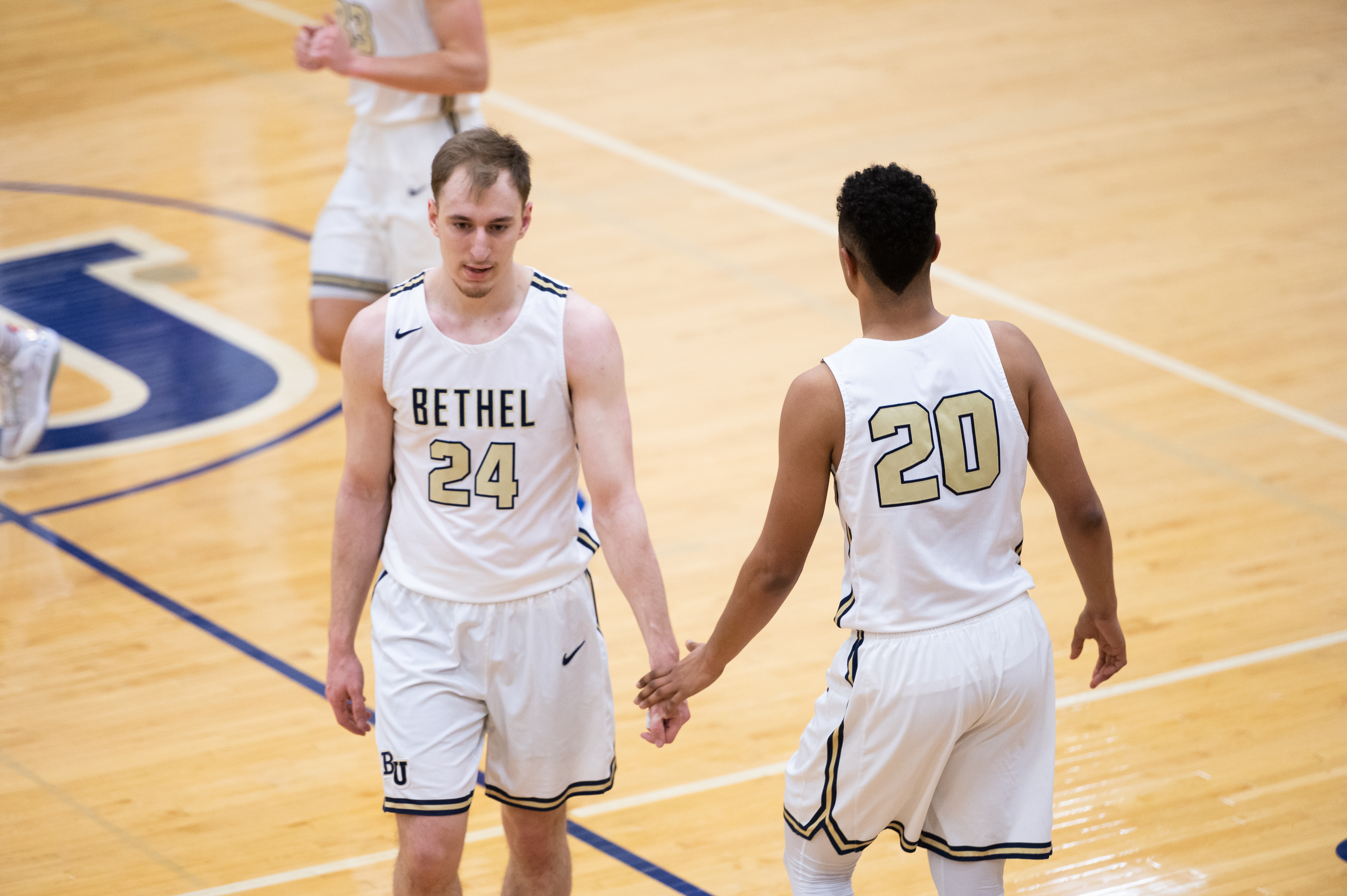 In an abbreviated season full of uncertainty, Bethel athletics performed strongly across the board in the Minnesota Intercollegiate Athletic Conference (MIAC). Here is your recap for the 2020-2021 Bethel Athletics winter sports season.

The men’s basketball team finished 4th in the MIAC standings this season, with a record of 3-5 in conference play. Senior forward Isaiah Carver-Bagley led the Royals’ scoring effort throughout the season, averaging 16 points per game with 128 points on the season. Carver-Bagley was among three Bethel athletes highlighted in the MIAC Athlete of the Week honors, announced March 1.

Freshman Joey Kidder ended the season tied for fourth place in the MIAC defensive categories, averaging 5.8 rebounds per game, one block per game and 1.1 steals per game. Kidder also dished out 26 assists, the most on the team, and averaged 3.3 assists per game.

“Playing with this group of guys and these seniors, it was enjoyable,” Kidder said.  “I think as a team we were a very solid group when we wanted to be. [There were a] couple games that slipped off our hands but also games like St John’s where we showed we were a dominant team.”

The women’s basketball team finished third in the MIAC standings this season. Senior forward Elizabeth Schwarz averaged 16 points per game, the third highest average in the MIAC. Schwarz also finished fourth in the MIAC in rebounds per game, and fifth in field goal percentage with 53.9 percent.

Sophomore guard Kat Brown-Erdal finished eighth in the MIAC in points per game, averaging 14.4. The 5’9” Jordan, MN native dropped a season-high 30 points in Bethel’s first win of the season against Saint Mary’s University on February 6.

Bella Williams led the Royals defense with 35 steals on the season, 35 rebounds and also facilitated to her team with 34 assists. Williams averaged the second most assists in the MIAC with 4.9 per game.

“The team has done a great job at keeping their heads up and staying motivated to try our hardest in practices and games,” Williams said. “I love seeing my teammates succeed and I love to do everything I can for them to get open shots, but I love how everyone wants each other to succeed and it creates such a fun and supportive environment with our team.”

The men’s hockey team finished 2-6 in the MIAC this season, with three of their eight games being lost by just one goal. Despite their losing season, there were some highlights.

Forward Carter Wagner finished his freshman campaign with seven points, five goals and two assists. In his first time on the ice, Wagner scored his first goal as a Royal in a 5-2 win over Hamline University.

“I think that our team has shown a lot of toughness and heart to battle through all the stuff with COVID this season just so we could play the game we love,” Wagner said.

The women’s hockey team finished third in the MIAC standings this season, with a 6-2-1 record.

“Our tenacity and work ethic showed when we beat Gustavus for the first time in years,” Stafne said. “I am so proud of every single one of these girls, who shows up every day and gives it their all for the girls beside them.”

Junior thrower Gabe Irons had an outstanding season, breaking the Royals’ program record for the weight throw with a throw of 18.35m / 60’2.5″ which broke the previous record by a full meter.

“With the help of coach Meyer and coach Olson I got to where I needed to be both physically and technically,” Irons said. “This whole season has been dedicated to beating that record.”

Irons also spoke about the difficulties the program has had to overcome this year, with Conference and Nationals being cancelled.

“We had one of our best seasons and it was because we never gave up hope that there was a reason for competing,” Irons said.

Freshman distance runner Annessa Ihde had one of the best 800m races in Bethel’s Program on February 27.  Ihde came in second place with a time of 2:16.29. This is the fourth best time in program history, and the eighth best time in the nation.

“I honestly didn’t know what to expect freshman year,” Ihde said. “I didn’t even know if we would get to compete indoors, but I couldn’t have asked for a better start to college track. It’s been so much fun, and I can’t wait for the outdoor season!”