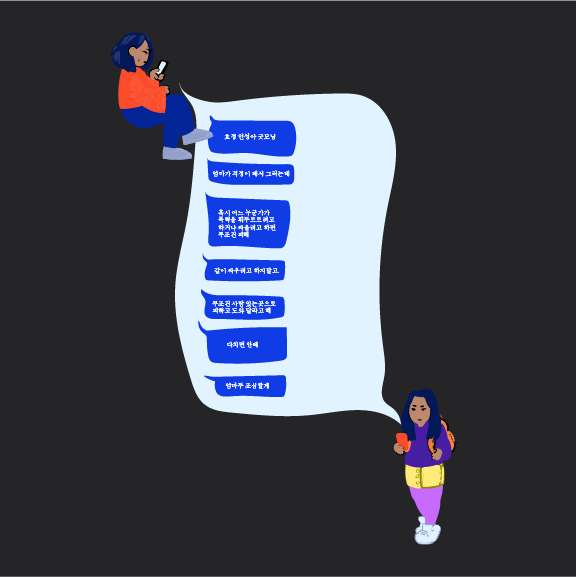 Good morning Hyojung and Inseong (myself and my sister)

I’m saying this because I am worried as a mom,

but if anyone tries to be violent towards you or tries to fight with you, you have to run away no matter what

Do not try to fight back.

Make sure you run to where people are and ask them for help no matter what.

You cannot get hurt.

I’ll make sure to be careful too.

These texts were sent after my family read the horrific news that eight people were killed March 16 in a suburb north of Atlanta, six of whom were Asian women.

Cherokee County Sheriff’s spokesman Jay Baker claimed the white terrorist was having a “bad day;” that he suffered sex addiction, a habit at odds with his Christian faith; that killing those women was a way of removing sexual temptation.

Was that supposed to make me feel better?  That he’s actually a great Christian who just struggles with sexualizing Asian women and went ahead and specifically killed them when Target ran out of chocolate on his grumpy day? How ridiculous. How hurtful. How racist.

I see my mom in the victims of the shooting. Hyun Jung Grant was only 51 years old, and her life was stolen from two sons both close to my and my younger sister’s age. That could have been us grieving our mother’s death in a nation that pulls the corners of its eyes at us and oversexualizes our women.

I’m angry at the politicians who still use rhetoric such as “China virus,” “Kung Flu” or “Wuhan virus” when discussing COVID-19. It’s ridiculous that people don’t acknowledge how America’s xenophobic history and language is the reason why our Asian elders are being set on fire, why a two-year-old and her family were stabbed in Texas by a white man, and why people are yelling at Asian Americans to go back to where they came from.

Do people not understand that impact is felt so much more than intent? It doesn’t matter that people who call COVID-19 the “China virus” didn’t want all these Asian hate crimes to happen. Because they did happen. I don’t care about intentions when people are listening to what is said and killing people because of it. It is not Christ-like to ignore the pleadings of the Asian community, and instead we must call for mindfulness toward problematic rhetoric.

Just this past month, my mom and I were parked at the McDonalds near Bethel when a white man pulled up next to our car, peered inside and glared at us while shaking his head angrily. You know what makes me even angrier, though? My mom, not fully understanding the racist history of this nation as a first generation immigrant, just smiled at me and said, “Maybe he’s just having a bad day.” How many more “Ni-hao’s” do we have to get in the middle of a grocery store, and how many more beatings do our elderly need to endure for people to stop taking their bad days out on us?

My mother often visits me at Bethel so I can help her fill out insurance and banking paperwork, a duty I’ve taken on as her eldest daughter since a young age. She often ends her visits with a sad sigh, tears welling up in her eyes. In Korean, she softly tells me “I’m sorry that this has become a burden to you. I’m supposed to take care of you, and here you are, taking care of me.” Knowing that it worries my mom when I cry in front of her, I often hold my breath and smile back, reassuring her she doesn’t have to apologize.

She’s the kind of mother who would wake up at 5 a.m. to make my sister and I fresh pizza for lunch so we could feel more “American” at school. The kind of mother who searches the internet for American lunch recipes and signs her daughters up for the Go Bananas summer reading programs. The kind who comes into my room at midnight with a plate of fruit to encourage me through a late night of studying. With an aching shoulder and arthritis developing in her elbow, she wakes up at 3 a.m. every day to work at Walmart — motivated to fund her daughters’ education.

I see my mom in the victims of the Atlanta shootings. My heart aches for them. They were the Asian American moms who left behind memories that I and generations of young Asian Americans hold onto dearly. They are our mothers, our sisters, our grandmothers.

Did that man in the parking lot know that he angrily shook his head at my strong, Korean American mother who is sacrificing her time, energy and health for her family?

It’s people like that man in the parking lot and ignorant public figures who make standing up for myself at a predominantly white place like Bethel so exhausting. So, I have a few questions for everyone reading this. Does it make you angry to see the #STOPAsianHate art exhibit by the Egg stairs? Do you roll your eyes when you see the canvases painted with “We are not a virus?” If so, you are a part of the problem, and you might become the person in the parking lot who shakes their head at the sight of Asian people. And your kids might be the ones who stretch their eyes out at those who should be embracing who they are, those who are so much more than “ching chongs.”