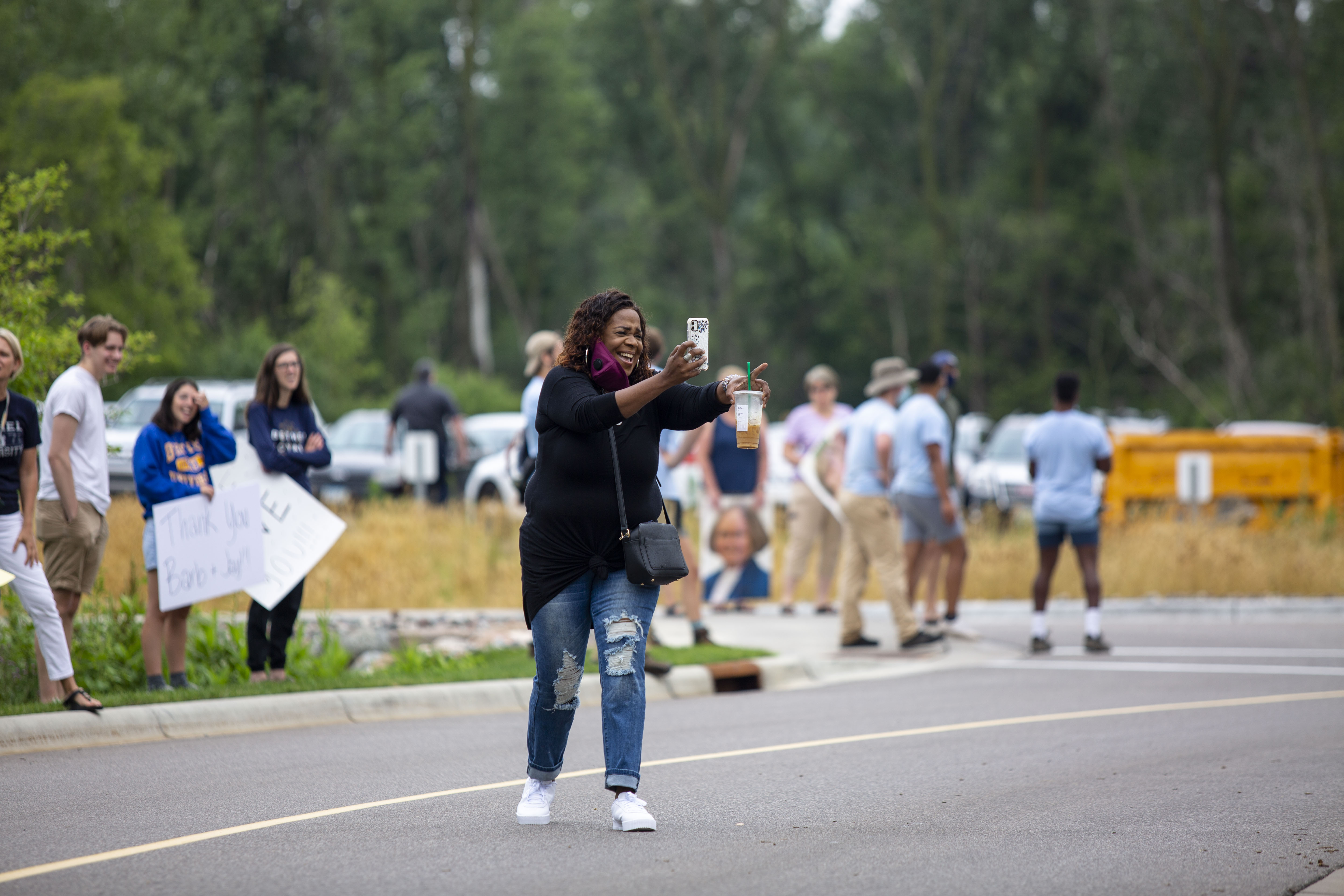 Laurel Bunker often stood on the Benson Great Hall stage at 10:15 a.m. Monday, Wednesday and Friday mornings, preaching about the love of the Lord and spreading the good news, but also actively discussing what social justice issues meant for the Bethel community as followers of Christ.

After 14 years in the position of Campus Pastor and Vice President and Dean for Christian Formation and Church Relations, Bunker concluded her service Aug. 6.

“It’s hard to describe what 14 years at Bethel has meant in terms of my own growth or how privileged I feel to have served so many students, staff and faculty while there,” she said.

President Ross Allen sent an email to the Bethel community July 22 explaining that two Cabinet positions were eliminated in favor of selecting a “single leader to oversee and elevate all aspects of our student experience across the university along with a strong focus on moving our faith commission work ahead.” Bunker and Vice President of Student Experience John Addleman’s positions were the ones cut, and neither of them would be that “single leader.”

Bunker also served as Interim Vice President of Diversity, Equity and Inclusion between the retirement of Ruben Rivera and the hiring of Dr. Rahn Franklin.

Former Faculty Senate President Amy Dykstra was “shocked and heartbroken” by the news, having worked closely with Bunker over the past several years.

“I deeply value her contributions. The Senate was not consulted about the cabinet restructuring, nor was the faculty informed before the announcement came out,” Dykstra said. “Many faculty are expressing shock, outrage, heartbreak and confusion in a faculty discussion email thread.”

While Allen said it was inappropriate to discuss individual personnel decisions and conversations, his restructuring decisions were intended to focus on university-wide student spiritual development by merging student life, spiritual formation and athletics under one leader.

Dykstra said faculty and staff were unsure of how the change would affect students and were hoping for further clarification from the president’s office.

United Cultures of Bethel Executive Director Vanna Contreras met Bunker at the CFCR Office on her first day of college. She dropped in to meet with former CFCR administrative assistant Jackie Bonilla and instead found Bunker, who immediately made the impression of a loving and open woman of God.

Bunker worked with and prayed over Contreras in regard to the challenges of being a BIPOC student at Bethel.

“She was very open to talking about those cultural challenges, and what really helped was just reaffirming me as a student that I can do whatever I put my mind to and that the Lord always has my back,” Contreras said.

Even through short hallway interactions, Contreras always walked away from a talk with Bunker feeling motivated and affirmed.

“My favorite thing about Pastor Laurel is that she always had a voice of wisdom, almost as if she always knew what to say at the right time,” Contreras said. “It [was] so refreshing to see her in the position that she was in at Bethel. And it was different, so I really liked that she didn’t stop, and she always advocated for people.”

Contreras was caught off guard when Bunker’s departure was announced.

“My stomach just sank,” she said. “I really thought that she was going to stay another year. It was going to be a great time, and when I heard she wasn’t coming back, I just knew something was wrong … I was very sad, and I reached out and told her how much I missed her.”

“She was the last BIPOC woman in the Bethel faculty and staff  [who I interacted with on a regular basis] that I could look up to and rely on,” she said. “I felt as though a support system had been taken away from me and answers are still unclear.”

Hong met Bunker in the Cultural Connections Center as a PSEO student.

“She carried this energy that made me feel joyful,” said Hong. “She affirmed me with her life-giving words and she made me feel heard in my experiences. She is truly an incredible leader, and I’ll miss her very much.”

“Pastor Bunker provided valuable support to our community, but it cannot be one person’s job to help students of color feel welcome and loved at Bethel,” Allen said. “Our goal is to provide that support broadly across the university. We must all lean into that. This isn’t going to be an overnight change. We have work to do here.”

Now, Bunker is ensuring that her two daughters, a freshman and a junior, are adjusting well to life in college. Both attend Christian universities. Bunker is also spending time in prayer, reading and listening to God, waiting for her next calling.

“I had an extraordinary team of gifted colleagues, amazing student leaders and wonderful friends  to work with during my time to whom I owe so much,” Bunker said. “Suffice it to say, a piece of my heart will always remain at BU.”

3 comments on “‘Shocked and heartbroken’”