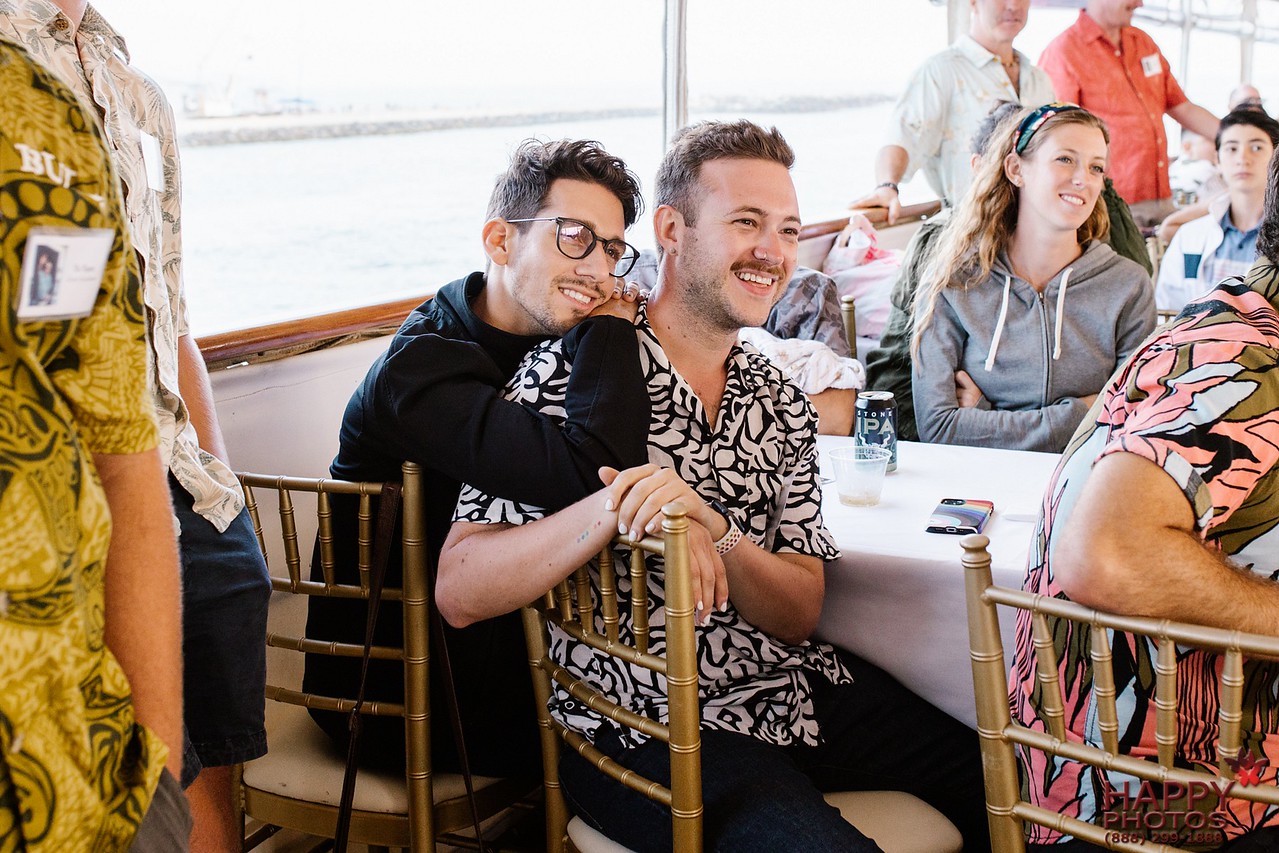 By Rachel Blood and Makenzi Johnson

Growing up as a conservative Christian, Evers says he was was taught that being gay is a sin, that homosexuality equated to going to hell.

Adam Evers hated himself for being a gay Christian.

Being a Christian was in his DNA. His identity, morals and beliefs were rooted in conservative Christianity, and choosing to attend a Christian university was a priority because he knew it would make his mom happy. He also wanted a good business program. Bethel checked all the boxes.

Moving through life as a gay Christian, Evers says he rejected himself before accepting himself, left faith before returning to it and eventually co-founded an app – believr – for the community he hadn’t known existed all his life.

That journey was not simple.

For Evers and his family, middle school was difficult physically and emotionally. Between finding a benign tumor in his hip, struggling with suicidal ideations and more, faith seemed to be the only consistency.

There was no room for homosexuality in conservative Christian theology.

“You have two identities warring with each other,” Evers said. “Too gay for the Christians, too Christian for the gays.”

The idea for believr struck Evers at the 2018 annual Queer Christian Fellowship Conference, an event held in Denver, Colorado intended to foster community between LGBTQ+ Christians. Evers realized the effort it took to get all of those people in one spot only once a year seemed futile when taking into account the technological opportunities for connection. A reported 4.1 million LGBTQ+ adults in the United States identify as Christian [see graphic]. He wanted to find a way to accomplish the same thing the QCF conference did, but from anywhere in the nation at any time.

“Fine,” Evers said, turning to Brandon Flanery, the friend he attended the conference with. “I’ll do it myself.”

Evers and Flanery, who had known each other since high school, founded believr in 2018.

In an introductory blog post, Flanery wrote, “We felt the need for this type of platform for years … It’s been hard to navigate jumping between two worlds we don’t quite fit in completely, especially two worlds known for having animosity and hurt with the other.”

Believr is not solely meant for finding romantic relationships. It’s a “community app,” and while users have the option to seek out romantic partners, the app also features open discussion forums for various topics and opportunities to establish platonic relationships.

At Bethel, Evers says he leaned into the conservative Christian movement, joining Campus Outreach and by extension the Southern Baptist Church. He kept his sexuality a secret.

“I thought I was going to die alone,” Evers said. “I thought that if anybody found out my secret, I’d be kicked out of Bethel.”

According to Bethel’s Covenant for Life Together, “homosexual behavior” is included in “character qualities and actions that should not be present in the lives of believers.” The Covenant also says, “We believe that sexual intercourse and other forms of intensely interpersonal sexual activity are reserved for monogamous, heterosexual marriage.”

Pastor Matt Runion said Bethel maintains a “historical interpretation of scripture on sexuality” while he also aims to pastor the community in a way that is inclusive and loving.

“Bethel holds expectations around sexuality that are the same for every member of the covenant community at Bethel,” he said. “The covenant includes us all – LGBTQ+ students included.”

On its website, Bethel’s Counseling Services lists sexuality – just after “anger” and before “homesickness” – as one of many issues that can be confidentially discussed in sessions.

“Any issues related to sexuality, including LGBTQ+ and Christianity, can be discussed … with the same limits to confidentiality as for other presenting issues,” Director of Counseling Services Miriam Hill said.

Students seeking theologically-based counseling are encouraged to do so through the Office of Christian Formation and Church Relations.

During his time at Bethel, Evers was involved with conservative movements and groups on campus that preached that gays were an “abomination.”

He lived in a Nelson Hall suite with five other men, some of the only people at Bethel who knew his secret: that he “struggled with same-sex attraction.”

Evers heard what he calls “tropes” of gay men being pedophiles and sexual abusers as a result of presumed sexual trauma spread by the student body during his time at Bethel. The fear and implicit hatred of homosexuality that came out of his experiences eventually drove him to do something he still regrets.

Evers says he exposed a peer’s sexuality to the Bethel administration.

“I think I did that, candidly, out of fear, living in my own shame and my own self-hatred. I hated everything LGBTQ+,” Evers said.

Several years later, that student reached out to Evers and called him out, pointing out the hypocrisy of Evers’ status as CEO of an LGBTQ+ Christian company and his actions as a college student. Evers apologized, though he knew sorry didn’t cut it.

“It’s probably one of my deepest regrets, outing [them] to the administration,” Evers said. He said the student was punished.

The Bethel Student Handbook reads, “Sexual relationships outside of marriage are a violation of biblical standards, the Bethel Covenant, and student standards of conduct. Students involved in these behaviors are subject to being placed on behavioral probation and may be assigned additional sanctions.”

The student philosophy of discipline in the same handbook reads, “…the Office of Student Life seeks to implement a disciplinary process that meets the student as an individual, examines motivations, repentance, teachability, and the student’s needs, and then determines an appropriate outcome for any offense based on the preponderance of evidence. Careful attention is given not only to the act in question but to the student in terms of predicament, response, intent, as well as influence upon the rest of the student body.”

“In any conduct and care situation, we seek to be redemptive and restorative in ways that are helpful to the individual and beneficial to the community,” Associate Dean for Student Engagement Nate Gustafson said. “We recognize that conduct and care conversations are a critical opportunity to engage students holistically. We desire to be a place where all Bethel students can thrive in community and be reminded of God’s great love and care for them.”

After years of grappling with his sexual identity, Evers rejected Christianity. A year and a half before he came out as gay at age 28, he decided Christianity didn’t have a place for him. He says he never felt affirmed. He had tried to “get rid of the gay,” and it hadn’t worked.

“We’re all supposed to be in the family of God … and you were going to take a very specific verse in the Bible [and] be like, ‘You can’t do this because you’re gay.’  Do you eat sausage? Do you eat shellfish? Do women talk in your church? Oh, okay. So literally, it’s just that verse that matters.”

For six months to a year, Evers denounced the faith.

But he felt himself drawn back.

He wanted a relationship with God. He didn’t want to stay away. Two years after moving to California in 2016, Evers found acceptance at Oak Life Church, a non-denominational church in Oakland, California.

“If you have been rejected by the church as a person of color, a woman, as a LGBT person, as a non-Christian or for any other reason, we’re sorry for the way you were treated,” Oak Life’s welcoming video says. “We believe that God loves you and we would be honored by your presence. … We want marginalized people to be welcomed here. … We don’t claim to know the truth fully, but we aim to follow Jesus and we seek to grow together.”

Evers said hearing this felt like a long-awaited hug from Christianity.

“It looks like the picture of heaven,” Evers said. “All tribes, nations and tongues.”

Bethel graduate Dr. Joshua Reno, who identifies as part of the LGBTQ+ community and serves as a lecturer at the University of Minnesota in the Department of Classical and Near Eastern Religions and Cultures, teaches classes covering the New Testament and other non-canonical literature.

Reno points out that same-sex relations have been taking place “as long as humans have existed,” although the identification of individuals practicing homosexuality as a group distinct from others was not recognized until much later, as the term “homosexual” first appeared in the English language in the late 1800s.

Reno invites his students to consider the intention of Paul’s teachings in 1 Thessalonians.

“In Paul’s mind, there’s a very clear hierarchy of sexualities. There are people who are celibate and don’t have sex, and they’re the best people … and then there are those that do marry and he says, ‘They are good, but not the best,’” Reno said. “He wishes everyone was celibate. I try to get people thinking about that.”

In his work, Runion focuses on “a high calling toward holiness and actively becoming part of God’s redemptive work in the world. No one does that perfectly – certainly not me – but hope remains.”

“In my ministry, I am called to remind people of their belovedness so that they can fully experience the hope found in Jesus,” Runion said. “Bethel is a particular Christian community with particular lifestyle expectations of our fellow covenant community members. … At the same time, we are beautifully diverse in our perspectives. Learning to love across differences in this covenant community is incredibly challenging – especially on matters like LGBTQ+.”

Evers wants the world to know that his relationship with God and his fundamental Christian beliefs are the same as all other Christians.

“We’re not any different than you. We believe just like you do. And we hurt just like you do,” he said. “Christians say that all the time … Jesus would hang out with the sinners and the prostitutes – stuff like that. If you actually think that we’re that bad, and you want to be like Jesus, [you] should just hang out with us.”

Evers wants LGBTQ+ Christians to know they’re not alone. The believr app is his solution.

0 comments on “‘Between two worlds’”