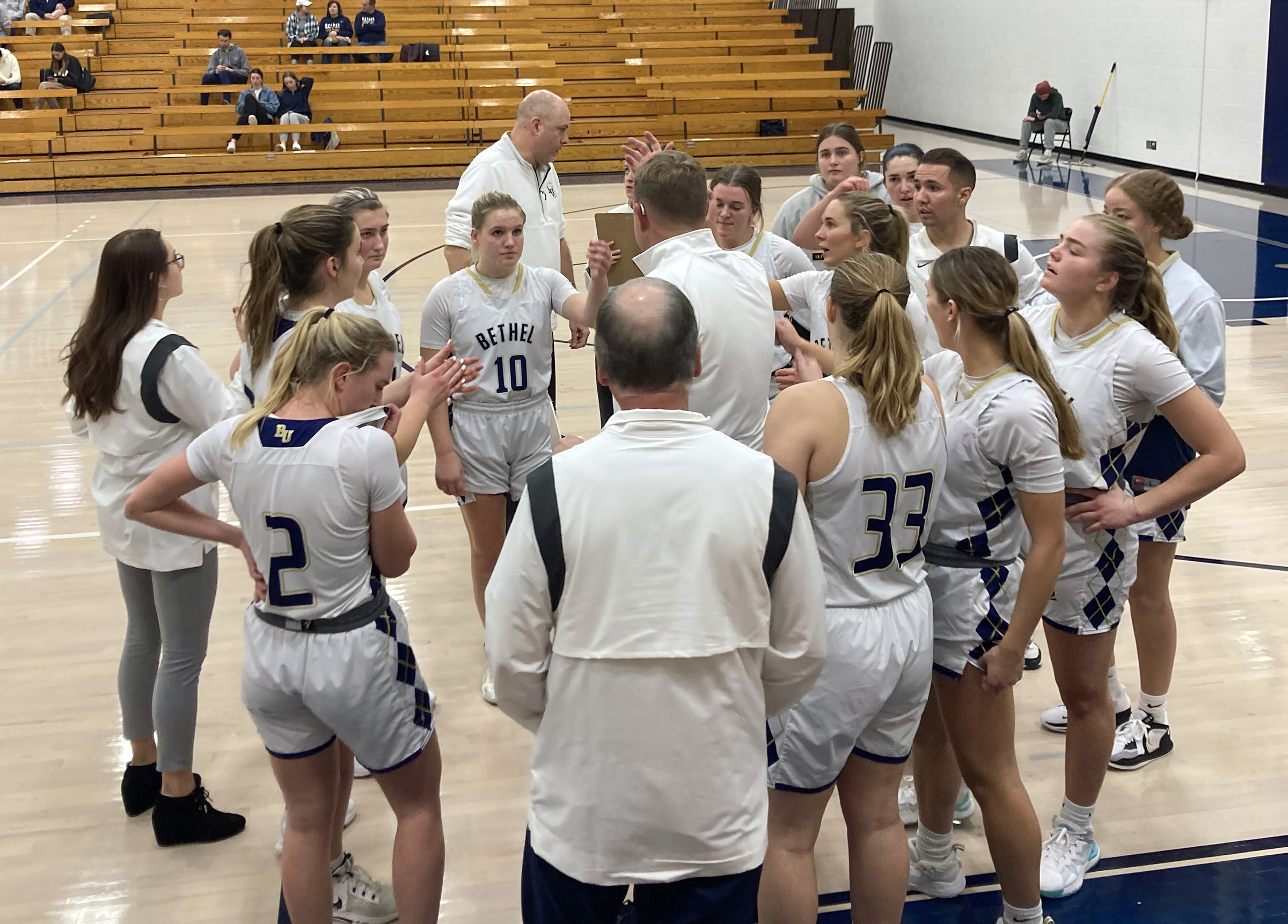 The Royals battled against rival Augsburg and won 58-52.

By Hannah Hunhoff and Talia Egge

With 9:25 minutes left of the 4th quarter, guard Anna Garfield threw the ball to forward Emma Schultz. She waved the ball in the air trying to figure out her next move as Augsburg player Anja Smith defended her – eyes focused on the ball and arms stretched out wide.

Garfield moved in front of Augsburg player Jaley Coplin, making herself open. Schultz made a quick, aggressive pass. Garfield caught the ball and weaved through Smith and Katie Manecke.

Once she passed them, she leapt up towards the net stretching her arms as long as possible. The ball left her fingertips. She scored.

The Royal coaches and line-up of players sprang from their seats – yelling and clapping. The Royals high-fived one another. Bethel had a 10-point lead at 43-33 and held out to win 58-52 Nov. 22 at the Robertson Center.

“Our goal was to get [Schultz] the ball, but she only got 13 shot attempts. It shows how good their defense was,” Royals coach Jon Herbrechtsmeyer said.

Following the Bethel Royals’ 63-56 win over University Wisconsin-Eau Claire last week, the team tried to carry the same energy in their game against Augsburg Tuesday. Herbrechtsmeyer said Augsburg is known for their physical and aggressive style and were the reigning conference champions. Garfield poured in 13 points, Schultz secured 11 and guard Colette Duinick scored 7 points to lead the Royals.

With 3:33 minutes left in the fourth quarter, guard Olivia Williams swooped down to her knees to catch the ball passed from guard Kendal Cox. A small group of teammates rallied around Williams as the weight of the play heightened.

The Bethel coaches and players on the sidelines screamed: “Let’s go team!” Moving steadily down the court, the Royals were on guard with their arms wide open. The group tossed the ball from teammate to teammate. Cox caught an air ball and swiftly passed it to guard Autumn Earney.

From the right side of the court, Earney scored.

“A 3 pointer for Earney,” the announcer said.

The Royals next game is at Hamline University Nov. 30.

“[Our goal for the next game is to] build off of what we did. We struggled with turning it over and building overall – offensively and toughness,” Sophomore guard Courtney Nuest said.