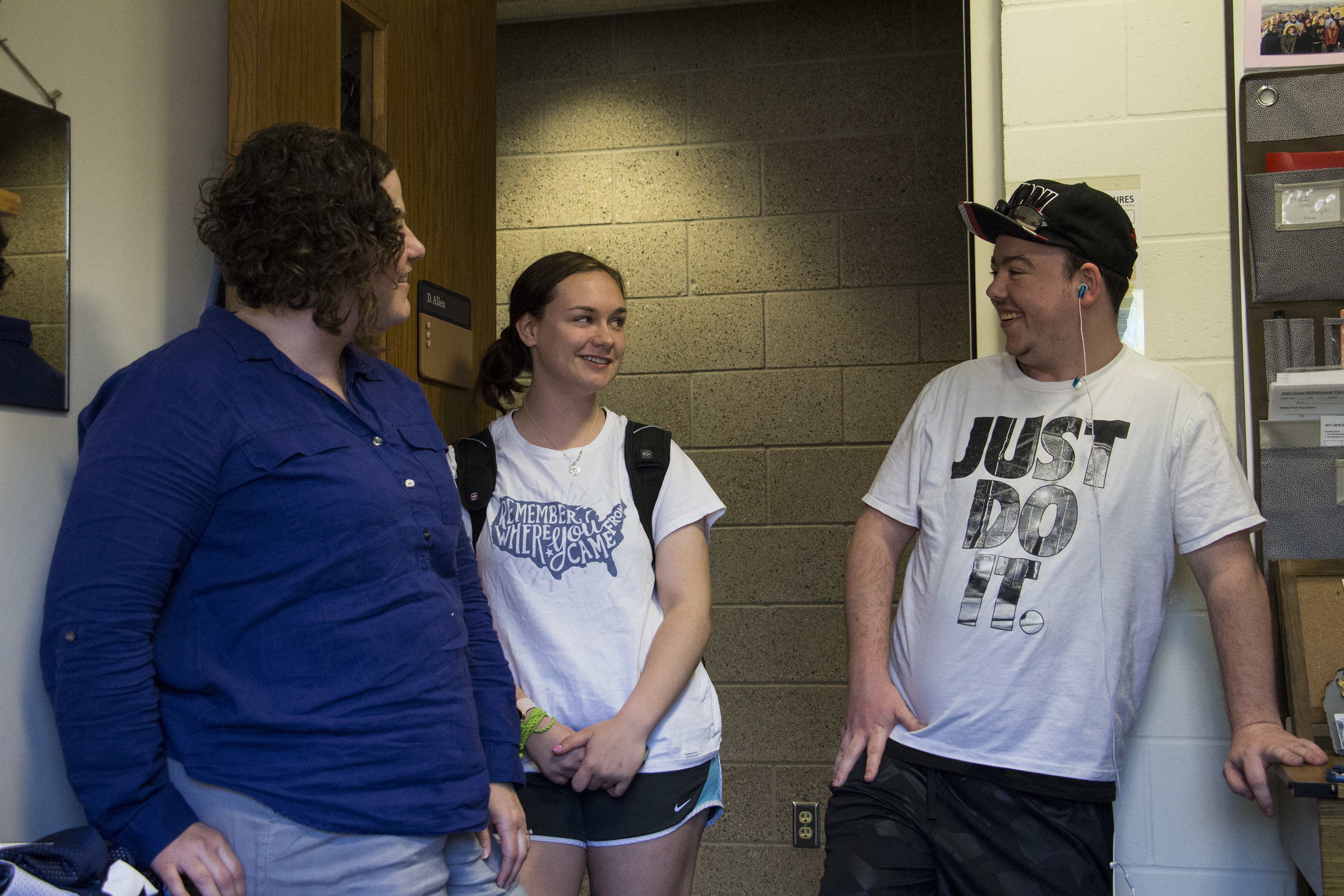 Program staff evaluate the next steps for graduate students.

By Jasmine Johnson and Alicia Dahl

Whether receiving a fist bump from Daniel Cline or witnessing the epic dance moves of Kirsta Graf and Olivia Elder, the three-year-old BUILD program has added a new energy to campus.

Eight students from the first graduating class completed the Bethel University Inclusive Learning and Development program May 2017. Among those graduates were Lauren Thysell and Ben Boatman.

Since leaving Bethel, Thysell spends 12 hours a week cooking at Harvest Moon and working at Therapy for Me. She lives in her own apartment, but visits her mother, Cathy Sallas, whenever she can.

As a member of the first graduating class, Thysell was featured in a 2017 Star Tribune article  that depicted students’ reflections of their time at Bethel.

Looking back on the past year since Thysell’s graduation, Sallas said enrolling her daughter in the BUILD program was worth the time and money.

“They have finessed the program to better fit true transition out of the program,” Sallas said.

Although Sallas appreciated the opportunity BUILD provided for Thysell, Sallas would encourage parents to use the government-funded programs offered after high school to assist in a smooth transition to college life. This additional time allowed Sallas to further prepare her daughter for independent living.

BUILD graduate Ben Boatman struggled with similar thoughts after departing from the program. Prior to engaging in this faith community, Boatman doubted the validity of Scripture.

“My life changed from Bethel,” Boatman said. “It was shocking to me because I thought that the Bible was like a myth. I didn’t know it was real.”

Whether forming friendships or discovering his own faith, Boatman expressed his gratitude for the opportunity to partake in the BUILD program and Bethel community.

“I was with football players at lunch and we would just be silly and joke around,” Boatman said. “Every Sunday we would watch NFL games together.”

No matter the time of day, program director Dawn Allen’s office creates a safe and welcoming space for students. She typically arrives at 7:30 every morning, but students are often already waiting outside. With a Keurig machine and plenty of snacks, the BUILD staff strive to maintain an area for open conversation.

“The opportunity to have a full college experience is something that we’re really proud of,” Allen said. “That’s what the program is all about.”

After completing their first year, BUILD students have the option to become social mentors to assist newcomers in the transition process.

“Having a student realize that she’s learning to pave the way for other students, and then being able to embrace the program because she sees it as something she’s helping to create,” Allen said. “I think that was probably one of the most beautiful moments.”

Through the challenging and rewarding alike, residential supervisor Katie Lane expressed the impact that BUILD students have on Bethel’s campus.

“They just have a zest and a joy for life,” Lane said. “I think just being with them, you just can’t help but have a good time and for sure smile.”

Though changes and improvements continue to refine the program, Bethel pastor and BUILD teacher Jason Steffenhagen hopes to see each student take steps toward a brighter future.

“The goal is for them to get out there and build on their BUILD experience,” Steffenhagen said. “My hope is that the themes that we’ve talked about – love, grace, forgiveness, the idea of seeing life as a hopeful thing – are what they take away from it.”

0 comments on “BUILDing towards the future”